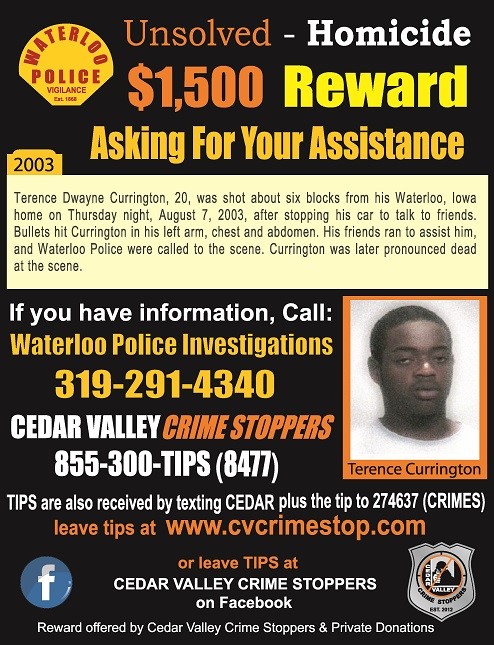 Terence Dwayne Currington, 20, was shot about six blocks from his Waterloo, Iowa home on Thursday night, August 7, 2003, after stopping his car to talk to friends.

Currington, who lived at 1019 Adams Street, had stopped in the middle of the 400 block of Adams Street about 11:30 p.m. to talk with 16-year-old Terry Hoskins and one of Hoskins’ friends just before another vehicle pulled up alongside Currington’s car.

Occupants in the two vehicles shouted at one another before shots rang out.

Bullets hit Currington in his left arm, chest and abdomen.

His car traveled a short distance down the block before hitting a tree on the parking strip at 415 Adams Street.

His friends ran to assist him, but Lt. Randy Schoenfelder said Currington was pronounced dead at the scene.

Currington’s death was the city’s first homicide since January.

The night after Currington’s murder, friends and relatives gathered with neighbors at the scene to hold a memorial vigil. Mourners held candles and photographs and took a stand against violence.

“I couldn’t believe it, not my cousin. It can’t be happening like that,” Currington’s cousin, 15-year-old Tashee Sanford, is quoted as saying in a Courier article published August 10, 2003.

Relatives told the Courier Currington had an ongoing dispute with another individual over money. A few weeks prior to the shooting, Currington’s car windows had been smashed and the debt considered settled, said Kenisha Keller, Currington’s girlfriend.

Keller said the argument continued, and there had been a fight just three days before the shooting.

She’d been with Currington shortly before the shooting, Keller told the Courier, and he’d left for what was supposed to be a brief errand. Currington apparently stopped to talk with some friends in the 400 block of Adams Street, where he was shot.

One year before Currington was shot and killed, his cousin, 20-year-old Martavious “Tay” DeShaun Robinson of Waterloo, was also shot and killed along with another man on Thompson Avenue in September 2002. Less than a year after Currington’s murder, another cousin, Robert Vincent Robinson, 20, was shot to death in the parking lot of Waterloo’s Uptown Lounge on Mulberry Street. In a Courier article dated June 7, 2004, relatives said the killings were not related.

“They was all cousins. Back to back to back. They grew up together,” John Joseph Sanford Jr., Robert’s youngest uncle, told the Courier in a May 22, 2005 story following an arrest in Robert Robinson’s homicide. Robert Robinson’s accused killer, Ramale Hunt, 20, had eluded police for nearly a year before being captured in Arizona and then returned to Waterloo to face first-degree murder charges.

The same Courier article stated police still had the car Currington was driving when killed and were holding it for evidence.

Capt. Bruce Arends told the Courier the department was still looking into both Currington’s and Tay Robinson’s deaths.

“We certainly keep investigators assigned to those,” Arends told the paper, “[but] we don’t have an overabundance of information from individuals who may have knowledge of the shooting.”

Terence Dwayne Currington was born in Waterloo on July 22, 1983, the son of Benjamin Grundy Jr. and Rose Currington. He attended East High and lived with his grandmother.

He was known for tinkering around with cars and electronics and enjoyed playing basketball.

Sanders Funeral Service handled arrangements. Terence was buried in the Garden of Memories Cemetery in Waterloo.

Anyone with information leading to an arrest is eligible for a $1,500 cash reward.