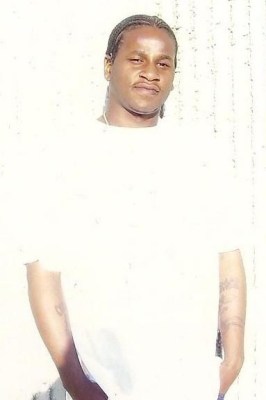 Taveros “Dino” DeShaun Galloway, a 29-year-old father of four, was driving his GMC Yukon in the 500 block of Courtland Street in Waterloo at about 11:15 p.m. on Tuesday, February 10, 2009, when someone opened fire on the truck. The sport utility vehicle continued on for about two more blocks before coming to a stop on the sidewalk in front of a Lane Street home.

Nearby residents contacted police, telling them they’d heard about six to eight gunshots.

The Waterloo Police Department said an autopsy by the State Medical Examiner’s Office determined Galloway died from a single gunshot wound to the head.

“Got Along with Everybody”

The father of four young children had spent the evening with his aunt, Gloria Galloway, with whom he’d had dinner. Galloway left his aunt’s home at approximately 7 p.m.

In a Waterloo Cedar Falls Courier articled dated February 12, 2009, family members and those who knew Galloway said they were puzzled over why someone would want to kill him. They recalled Galloway as always joking, and said he’d earned his “Dino” nickname after the “Dino the Dinosaur” character from The Flintstones cartoon.

“He got along with everybody; that’s why this didn’t make any sense to us, why somebody would take his life. He didn’t bother anybody,” Betty Dedrick, another of Galloway’s aunts, told the Courier.

Nation of Islam Minister Michael Muhammad told the Courier Galloway was soft spoken and not a troublemaker, and asked people to remember Galloway for his heart. 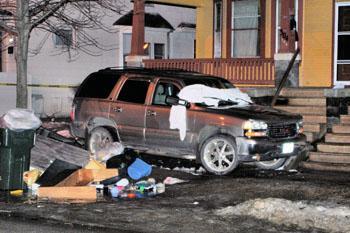 “Another young brother has lost his life to the streets,” Muhammad said in the interview. “We have to take a stance.”

About 70 people gathered the night after Galloway’s murder to remember him and call for a halt to violence. A wooden cross was thrust into a snowbank, and others carried signs stating “Let there be peace on Earth” and “Pray for Peace.”

Sharon Goodson of the Black Hawk County’s NAACP chapter told the Courier community leaders had tried different ways to reach young people in attempts to reduce violence, but with little success. Goodson said they asked youth not to hesitate to seek help from a church for any problems they might have. 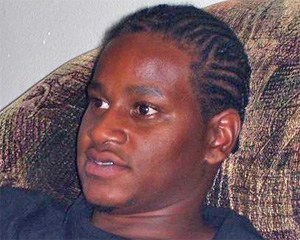 “People Need to Stop the Violence”

One year after her son’s murder, Galloway’s mother, Lillie Smith, spoke with the Courier at a candlelight vigil at the spot where her son’s vehicle had come to a stop.

“I don’t want another mother going through what I’m going through,” Smith told Courier reporter Jeff Reinitz in an article dated February 11, 2010. “People need to stop the violence, take a stand.”

Gloria Galloway, the aunt with whom Taveros Galloway had dinner the night he was killed, also attended the vigil and had this to say to the Courier:

“We need the culprit, the coward, the inhumane person who did this. We need him off the streets.”

“We believe there are people who have information and haven’t come forward yet, and if they would come forward we would appreciate it,” said Captain Tim Pillack of the Waterloo Police Department. 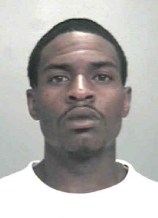 Courtesy photo WCF Courier
Erik Devon Shavers was sentenced for up to 30 years in prison for making false statements to police in Taveros Galloway’s murder.

In April 2011, Erik Devon Shavers, 26, of Waterloo was sentenced for up to 30 years in prison for making false statements to police regarding Galloway’s unsolved murder.

A Courier article dated Friday, April 29, 2011 citing court documents said police suspected Shavers of driving a car shortly after the shooting, when [police] say his passenger threw a gun out the window. Shavers told police under oath he couldn’t see what the unnamed passenger was doing because [Shavers] had been sprayed with Mace.

According to the Courier, Shavers entered an Alford plea to the perjury charge, meaning he didn’t admit guilt but conceded enough evidence existed that he’d likely be convicted at a trial.

The Courier also reported in the article:

Shavers, who qualified as a habitual offender because of two prior felony convictions, must serve at least six years in prison before being eligible for parole.

To date, no one has ever been charged or held accountable in Galloway’s unsolved homicide.

Taveros DeShaun Galloway was born October 29, 1979, in Waterloo, the son of Lillie Galloway and George Coffer.

He attended Waterloo East High School and later obtained his GED. He had attended Hawkeye Community College and was most recently employed at Salt-n-Pepper Foods. 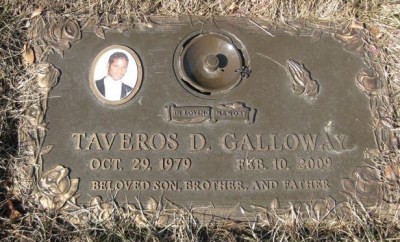 He was preceded in death by maternal grandfather, David Galloway; and maternal great-grandparents, John and Ethel Sallis.

Memorial services were held at noon on Friday at Payne Memorial AME Church, with burial in Garden of Memories Cemetery. Public visitation was held Thursday from 5 to 7 p.m. and an hour before services Friday, all at the church. Sanders Funeral Service was in charge of arrangements.

Memorials were to be directed to the family at 2547 W. Ninth Street.

Anyone with information about Taveros Galloway’s unsolved murder is asked to contact the Waterloo Police Department‘s Investigations Division at 319-291-4340 ext. 3, or Cedar Valley Crime Stoppers at 855-300-TIPS (8477).