Steven Kirchhoff’s family has established a new Facebook page for him with hopes of gathering information that might lead to his recovery and justice for both Steven and his family. Visit Steven’s Facebook page here.

Steven Kirchhoff, 22, was last seen at his Cedar Falls home on Tuesday, January 24, 1978, by his brother, Tommy Kirchhoff. Tommy reported that Steven was wearing a short burnt orange leather jacket, a blue sweater, dark blue corduroy pants, and brown shoes with the word GASS written on the soles.

When Tommy Kirchhoff did not see his brother for the next 12 days, he reported him missing to the Waterloo Police Department on February 5.

Officials believed Kirchhoff may have been involved in the sale of illegal drugs, and foul play has long been suspected in his disappearance. The state lists his case status as involuntary, a category used for people who are missing under circumstances believed to be an abduction.

Kirchhoff was described as being 5’11” tall, weighing 140 pounds, with brown hair and brown eyes.

Kirchhoff most recently had worked as a lineman for the Chicago Northwestern Railroad but had been laid off weeks before his disappearance. Nonetheless, Kirchhoff had just purchased a new house and appeared to be in good spirits. 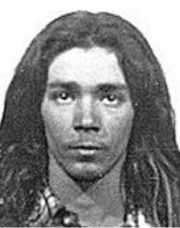 In 2003, authorities acting on a tip began searching a rural 12-acre farmstead between Fairbank and Denver, Iowa, for evidence related to Kirchhoff’s case.

The farmstead was once owned by a Waterloo man, Lonson “Lonnie” Luloff, who faced life in prison for federal methamphetamine and weapons charges in 1994 but was released in 2000 after cutting a deal with prosecutors.

Investigators at the time described Luloff as one of the biggest drug suppliers in the area, though they uncovered no signs of Kirchhoff when searching the farm ground.

Another missing Iowa man, Richard Forsyth, is believed to have been connected in some way to Kirchhoff’s disappearance.

Press accounts at the time noted that Forsyth was seen carrying something from his apartment wrapped in a rug.

It is here where lines begin to blur of what reportedly happened.

“As long as you’re alive as a mom and dad, you’re still hoping. You never really give up hope,” said Marga Kirchhoff, Steven Kirchhoff’s mother, in a Waterloo Courier article published Monday, April 30, 2001. “Well, I guess you’re hoping for a miracle is what you’re hoping for.”

Fingerprints and dental records are on file and available in Steven Kirchhoff’s case; he had several fillings in his teeth and also had other dental work done. 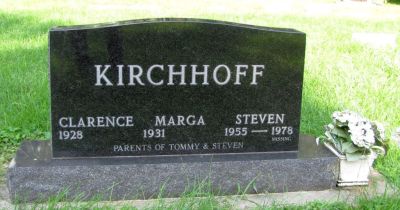 Courtesy photo Couple of Gravers, findagrave.com
Steven Kirchhoff’s parents, Marga and Clarence Kirchhoff, added their son’s name to their gravestone so he’d not be forgotten.

Kirchhoff’s parents have no illusions their son is still alive.

Although Marga Kirchhoff and her husband, Clarence, continue to hope their lost son is still alive, they’ve already added his name to the headstone that will mark their own graves.

“That was a hard thing to do,” Marga said. “One of the reasons we did it was so we at least have Steve’s name some place. If we never get to bury him, it would be like he never lived.” 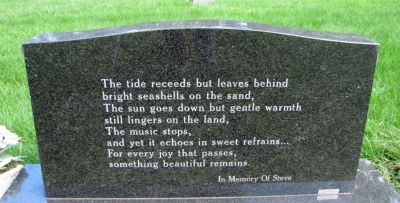 Courtesy photo Couple of Gravers, findagrave.com
The headstone for Steven Kirchhoff is erected in the Waterloo Cemetery in Black Hawk County.

Marga said she’d felt relief for another family when Tracy Ann Carson, 39, was laid to rest in late April 2001, more than six months after Tracy disappeared from a La Porte Road tavern. Tracy’s body had been found in Crane Lake on Wednesday, April 23, the victim of a homicide.

“I guess it’s bad when you consider somebody lucky when they find their dead child,” Marga Kirchhoff told the Courier. “It always comes to my mind how lucky they are. Well, I know they’re not lucky because their child is dead.”

If you have any information concerning Steven Kirchhoff’s unsolved disappearance and suspected homicide, please contact the Waterloo Police Department at 319-291-4340 ext. 3 or Cedar Valley Crime Stoppers at 1-855-300-TIPS (8477). There is a reward for information leading to an arrest and conviction in this case.