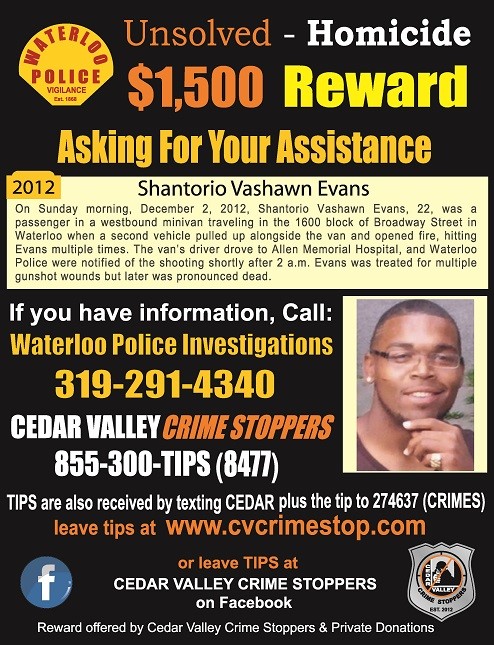 On Sunday morning, December 2, 2012, Shantorio Vashawn Evans, 22, was a passenger in a westbound minivan traveling in the 1600 block of Broadway Street in Waterloo when a second vehicle pulled up alongside the van and opened fire, hitting Evans multiple times.

Those inside the van, including Evans, had gone out to celebrate a friend’s birthday.

The van’s driver drove to Allen Memorial Hospital, and Waterloo Police were notified of the shooting shortly after 2 a.m.

Evans was treated for multiple gunshot wounds but later was pronounced dead.

“We don’t know what happened. All we know is we got a call, and when we got to the hospital, the doctor said he was gone,” Evans’ stepfather, Hollis Swington, told the media Sunday afternoon.

Swington described Evans as a “good kid,” who had both a daughter and a mother that loved him.

Evans did construction work for Labor Ready and other companies, and Swington said his stepson worked on the Covenant Medical Center expansion and had assignments at Crystal Ice.

According to the Courier, Evans had a brush with the law in 2008 when he was 18, but relatives said he’d put his life back together after that and cared for his four-year-old daughter, Shantoriana. Friend Taras Robinson described Evans as “book smart and loyal.”

Waterloo Police Capt. Tim Pillack said police don’t suspect Evans was targeted at random, and that no one else in the minivan was injured.

Online court records, according to a Dec. 2 WHO-TV Channel 13 report, show Shaun Evans was involved in a shooting four years ago. Evans spent time in jail and was released on probation, and police said they were considering Evans’ connection to that case among all the other leads being investigated.

On Tuesday, Dec. 4, family and friends gathered from 6 to 7:30 p.m. at Payne AME Church for a vigil and show of support to remember Evans.

“At some point, we need to stop this senseless killing,” Pastor Steve Perkins said during the vigil. Perkins encouraged those in attendance to seek the company of people who would help them achieve their goals.

Cedar Valley Crime Stoppers only launched its Waterloo area chapter in June 2012, but already is putting the program to a test; other than cold cases, the group hadn’t formerly offered rewards for information in homicides — until Shantorio Evans’ slaying. Immediately following his death, they announced a $1,000 reward for information leading to an arrest in his case.

“Essentially, this is the first major test of the program — and it’s a big one,” said Waterloo Police Investigator Brice Lippert, the police liaison for the Cedar Valley Crime Stoppers in a KWWL Channel 7 report that aired December 3.

Lippert said Evans’ case is exactly why the local Crime Stoppers group was created, and that someone out there knows what happened.

“Some days, I’ll come in and there won’t be any tips,” Lippert said. “Other days we might have five or ten tips.”

Lippert said money is powerful, and that with an incentive of a $1,000 paycheck just for calling in with information, the group hopes someone will do the right thing.

“We’re really hoping the public has faith in us now that we’ve been around awhile and they will trust us with the information to forward it on and get an arrest made in this case,” he told KWWL.

Tipsters were encouraged to contact Cedar Valley Crime Stoppers at 1-855-300-TIPS (8477) with any information.

Thus far, no arrests have been made in Evans’ slaying.

He was employed by Labor Ready as a construction worker.

Survivors included a daughter, Shantoriana of Waterloo; his father of Sallis, Miss.; his mother and stepfather, Angela and Hollis Swington of Waterloo; two sisters, Terri Anderson and Shirley Greer, both of Sallis; and three brothers, William L. Burt, James D. (Kenya) Evans and Willie C. Evans, all of Waterloo.

He was preceded in death by his paternal grandmother, Eva Greer, and his maternal grandfather, Douglas Burt Sr.

Memorial services were held at 1 p.m. Friday at Payne Memorial AME Church, with burial in Garden of Memories Cemetery in Waterloo. Visitation was held from 5 to 7 p.m. Thursday and for an hour before Friday’s services, all at the church. Sanders Funeral Service assisted the family.

Memorials were to be directed to the family at 742 Willow St., where they received friends.

Anyone with information about Shantorio Evans’ murder is asked to call the Waterloo Police Department at 319-291-4340 ext. 3, or the Cedar Valley Crime Stoppers at 855-300-TIPS (8477). Callers may remain anonymous and be eligible for the $1,500 cash reward.

Copyright © 2020 Iowa Cold Cases, Inc. All rights reserved. This material may not be published, broadcast, rewritten or redistributed.