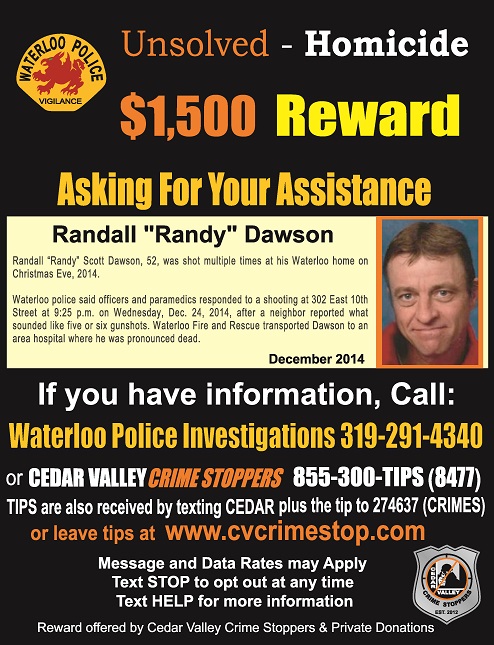 Waterloo police said officers and paramedics responded to a shooting at 302 East 10th Street at 9:25 p.m. on Wednesday, Dec. 24, 2014, after a neighbor reported what sounded like five or six gunshots. Waterloo Fire and Rescue transported Dawson to an area hospital, where he was pronounced dead, said Daniel Trelka, director of safety services for Waterloo.

Trelka said police were looking for one or two “persons of interest” in the shooting.

One person was placed in a squad car in handcuffs shortly after police arrived on scene but was not arrested.

“I didn’t even ask, he came over and offered,” Iehl told the Courier’s Jeff Reinitz and John Molseed, who reported that Dawson lived at the E. 10th St. home with other relatives.

Neighbors home at the time of the shooting said they didn’t hear much until police arrived.

“I was sitting here, and I heard like three loud thuds. It didn’t really sound like gunshots to me, just thuds. Then next thing I know, I heard all the sirens,” one neighbor a few doors down from the scene of the shooting told the Courier.

Iehl, who lives at the same address, had just returned from a Christmas light festival with her son and said the incident left her unnerved.

“I’ve got a 5-year-old who lays his head down right there,” she said, pointing at her home one house away from where Dawson had been shot.

According to the Courier, Dawson and his relatives had moved into the house — which sits on the corner of East 10th and Lafayette streets — less than a year ago. One neighbor said he’d recently heard early morning altercations taking place at the home.

Waterloo police officers cordoned off the home with crime scene tape, and two squad cars guarded the scene through Christmas Day until investigators could arrive.

“This is getting too close to home. I’ve been here 17 years, and sure there has been a thing happen a time or two, but there’s been a lot of shooting going on anymore,” a neighbor who declined to give her name told the Courier. “I wish people could just get along.”

On Wednesday, September 23, 2015, KWWL Channel 7’s Olivia Mancino met with Dawson’s daughter and girlfriend outside Dawson’s former home. The two women described Dawson as a jokester with a heart that let everyone in.

“He would give anybody any kind of assistance they needed, the shirt off his back. He would take the time to help anyone,” his daughter, Rachel McKinney, told KWWL.

“Every time I think about him I smile,” Becker told Channel 7. “But he was great about being strong and he left a lot of that strength with me.”

Becker named the child Randy Scott Dawson, after his father, and said she is grateful she has a piece of Randy forever.

“Our son is doing great and he would be so proud,” she said. “I’m going to give our son a great life like I know he wanted.”

McKinney told KWWL she planned to speak at the National Day of Remembrance Murder Victims Walk in Waterloo on Friday, Sept. 25, 2015.

He was born Dec. 15, 1962, in Waterloo, the son of Leslie and Jeanne Neibergall Dawson. He married Michelle Hammargren, and they later divorced.

Randy attended Hawkeye Community College and received his certification in welding. He was self-employed in home improvement and worked in property maintenance.

Memorial services were held at 11 a.m. Saturday, Dec. 27, 2014 at Parrott & Wood Chapel of Memories, an Overton Family Service, with burial in Poyner Cemetery. Visitation was held from 4 to 7 p.m. Friday and an hour before services Saturday at the funeral home.

If you have any information about Randy Dawson’s unsolved murder please call the Waterloo Police Department at 291-4340 ext 3 or Cedar Valley Crime Stoppers at 855-300-TIPS (8477).

Tips may be sent with TipSoft or by texting the word CEDAR plus the information to CRIMES (274637). Message and data rates may apply. Text STOP to opt out at any time. Text HELP for more information. Tips may also be left at WWW.CVCRIMESTOP.COM.