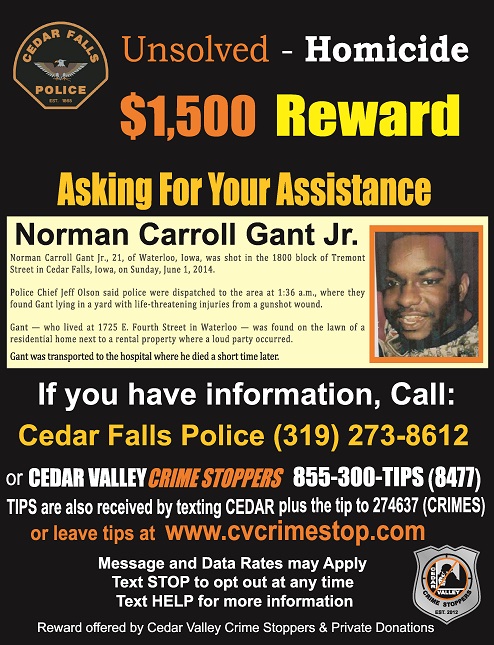 Police Chief Jeff Olson said police were dispatched to the area at 1:36 a.m., where they found Gant lying in a yard with life-threatening injuries from a gunshot wound.

Gant — who lived at 1725 E. Fourth Street in Waterloo — was found on the lawn of a residential home next to a rental property where a loud party occurred Saturday night.

Paramedics transported Gant to Sartori Hospital, where he was pronounced dead a short time later.

An autopsy was conducted at the State Medical Examiner’s Office in Ankeny that same day.

In a press release, police said the shooter “remains at large” but that the public in the area was not at risk. They did not release a description of the shooter.

Cedar Falls police and state troopers used squad cars to block off access to a two-block section of Tremont Street following the shooting as they talked with area residents.

Chief Olson said the shooting happened outside near a car part way down the block south of 18th Street during a party at one of the houses on the block.

Tim Olsen, who lives on the same block where the shooting occurred, told KCRG-TV9 he awoke to popping noises.

“I think there was three, but I’m not real sure about that,” Olsen told KCRG in a story airing later that day. “But in this neighborhood they shoot fireworks a lot, because we live in a college town.”

Olsen, who said he’d lived in the neighborhood since 2009, said college kids rented houses around the area and occasionally had parties. Still, he was shocked to learn Cedar Falls police were investigating a homicide.

Gant, the youngest of seven children, had just celebrated his 21st birthday in March.

On Monday, June 2, 2014, his sister, Laniya Keys, spoke with KWWL Channel 7 News from her mother’s home in Waterloo. She said she kept waiting for her little brother to come home.

“I don’t think it’s real. It’s not real. I want him to pull up. I want him to walk through this door, but I know that he won’t,” Keys told KWWL reporter Nikki Newbrough.

Keys called her brother an outgoing guy who had no enemies, and said his death wasn’t fair to his friends or family. Her brother, she said, was studying business at Kaplan University in Cedar Falls and dreamed of owning his own business.

Another sister, Tanesha Keys, told the press the only information the family had was that the shooting occurred at a house party.

In a Waterloo Cedar Falls Courier article dated June 3, 2014, Capt. Berte confirmed there was a party in the area but said the exact connection to the shooting wasn’t clear.

“There was a small gathering at a house adjacent to where [the shooting] happened,” Berte told the Courier. He said it’s possible the shooter, the victim or others involved were leaving or arriving at the party.

According to the sisters, Gant wasn’t the kind to look for trouble and preferred hanging out with friends playing video games and basketball.

Family and friends gathered Monday night at 8:30 p.m. at the corner of Dawson and Reed streets to hold a candlelight vigil.

In a KWWL story airing June 9, 2014, Cedar Falls police said Cedar Valley Crime Stoppers was offering a $1,000 reward and that police also were offering a reward, but that the money would be related to the value of information.

Berte said there hadn’t yet been an arrest but he believes everyone is “interconnected.”

“We believe through our investigation that the shooter or shooters and the person who was killed and the associates that were in the area all had a relationship, and that this crime just happened to occur on Tremont Street in Cedar Falls,” Berte is quoted as saying in the KWWL report.

Norman was a 2011 graduate of Waterloo East High School where he’d played basketball, and had been employed by Omega Cabinets.

In addition to his parents, Norman was survived by his grandparents, the Rev. Theodore and Sarah Keys, and Ruby Moore, all of Waterloo; two brothers, Martaves Keys and DeVontez Braziel, both of Waterloo; a stepbrother, Acie Pippins of Longview, Texas; four sisters, Miesha (Terry) Phillips, Laniya Keys, Tanesha Keys and Rhonesha Keys, all of Waterloo; and two stepsisters, Valicia Gant and Malaysia Gant, both of Des Moines.

He was preceded in death by a grandfather, Sidney Moore.

Visitation was held from 5 to 7 p.m. Friday, June 6, and an hour before services Saturday, all at the church. Greer Funeral Home was in charge of arrangements.

Tips may also be sent with TipSoft or by texting the word CEDAR plus the information to CRIMES (274637). Message and data rates may apply. Text STOP to opt out at any time. Text HELP for more information.

Anyone with information leading to an arrest is eligible for a cash reward of up to $1,000, and tips may be made anonymously.