On Saturday, September 21, 2002, Martavious “Tay” DeShaun Robinson, 20, of Waterloo, and Calvin Maurice Rash, 29, of Chicago, were shot as they left the home of an acquaintance at 408 Thompson Ave. in Waterloo. 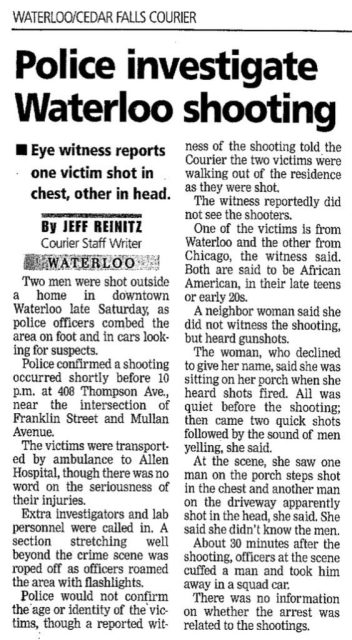 “We are looking at all leads, and all connections. There’s a special investigation on each of these cases,” Waterloo Police Chief Thomas Jennings said in a March 7, 2003 article published in the Waterloo Cedar Falls Courier. “We’re looking at any and all avenues and all directions for any possible leads and possible clues. We have all our resources devoted to locating these people and holding them accountable for their actions.”

The Courier reported that a connection among the three incidents had neither been confirmed nor ruled out.

“Any time you have incidents of violence like this, you always look at, is there a connection,” Jennings said.

In addition to Robinson and Rash’s unsolved murders, police were also investigating the January 3 slayings of Alonzo Quinn and his girlfriend, Rhiannon Olsen of Cedar Falls, who was nine months pregnant at the time she and Quinn were slain. The unborn child, a boy the couple planned to name Jalen, didn’t survive.

The March 6 shooting involved Samuel Lavar Landfair, 23, of 116 Harrison St., and Jimmie Junior Walker, 22, of 2723 E. Fourth St. in Waterloo. Both were shot several times in a nightclub parking lot at Edwards Street and old Logan Avenue. Each was in critical condition at Allen Hospital but survived.

Waterloo police acknowledged that at least two of the three incidents apparently involved drugs or occurred in areas of apparent drug activity, but said the incidents didn’t necessarily signal an increase in overall drug activity in the community.

Jennings said the police department was utilizing neighborhood associations, its street crimes unit, the Tri-County Drug Task Force and criminalistics laboratories. In addition, he said local police were working very closely with the Cedar Falls Police Department and the county sheriff’s office, and were asking for the public’s help with the unsolved shootings.

“These are acts being done against specific individuals,” he told the Courier, stressing that the incidents were not random.

Officials haven’t confirmed whether or not Robinson and Rash’s murders were somehow connected to Anthony Marcellus Cole of Waterloo and Cole’s September 2002 trip to Chicago, though the Courier identified many connections in an article published May 23, 2004. It started, the Courier reported, when Chicago police found a suitcase full of cash in the car Cole was driving on September 20, 2002.

The Courier reported the following findings:

Cole was eventually convicted of attempted murder and other charges and sentenced to 50 years in prison.

In addition to the Robinson and Rash double slaying, Quinn and Olsen’s murders also remain unsolved. 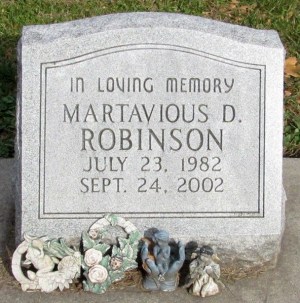 Martavious Robinson was born July 23, 1982 in Iowa City to Faye Robinson and Cliff Amborse Jr. He was buried in Fairview Cemetery in Waterloo.