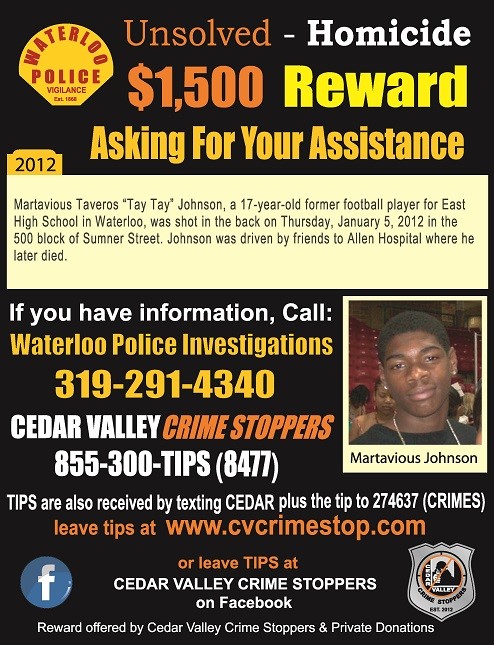 Martavious Taveros “Tay Tay” Johnson, a 17-year-old former football player for East High School in Waterloo, was shot in the back on Thursday, January 5, 2012, after cracking a joke.

According to a Waterloo Cedar Falls Courier article dated January 7, 2012, Johnson and his sister went to the 500 block of Sumner Street on Waterloo’s east side at about 8 p.m. to drop off the sister’s boyfriend. When a group walking down the street approached Johnson and inquired about his gang affiliation, Johnson apparently laughed and cracked a joke before turning to get back inside the vehicle.

Courtesy photo Matthew Putney / Courier Photo Editor
Waterloo police search a home at 511 Sumner Street for evidence after a shooting that sent one person to the hospital Thursday, Jan. 5, 2012, in Waterloo, Iowa. Martavious Johnson, 17, was shot in the back and died a short time later at a nearby hospital.

“He turned his back, and one of the dudes shot him in the back,” Johnson’s mother, Tanya Johnson, told the Courier.

The teen was driven by friends to Allen Hospital where he later died.

Investigators roped off part of Sumner Street on Thursday after the shooting and continued searching for clues at 511 Sumner Street into Friday morning.

“We’re not sure what it (the argument) was about,” Lt. Michael McNamee told a reporter for the Courier. “We’re at the stage where we’re still interviewing people.”

One resident claimed to have heard a shot, but couldn’t pinpoint the direction from which it came.

Courtesy photo Matthew Putney/Courier Photo Editor
During a vigil held Friday evening for his son, Willie Johnson asked Waterloo residents to remain calm and not rush to judgment, and to let justice take its course.

Waterloo Police brought in a 15-year-old for questioning, but wouldn’t say whether or not the teen was a suspect in Johnson’s murder.

Waterloo police Sgt. Andrew Clark told KCRG Channel 9 on Saturday evening that no subject or subjects had been arrested or officially charged.

All Sports, No Gangs

Johnson’s family members said they were given some details by people who were present when the shooting occurred.

Willie Harrington, Jr., the victim’s uncle, told the Courier his nephew wasn’t involved with any gang and and believed he was shot because of his response to a question.

According to family members, Johnson was far more interested in sports — particularly basketball and football — than he was in belonging to any gang. The former East High School student was more recently enrolled at Expo High.

In the Johnson’s Waterloo home, football and basketball plaques from the teen’s days on the Logan Middle School teams stood next to portraits of a young man known to family and friends as “Tay Tay.” Johnson’s aunt, Steppie Perry, told the Courier her nephew was fast.

“When he ran, you couldn’t catch him,” Perry said.

Courtesy photo WCF Courier
Martavious Johnson, standing, helps trim his 4-year-old nephew’s hair. The slain teen was interested in either opening a barbershop or landing a job at John Deere.

Johnson already had considered career options and was interested in either opening a barbershop or landing a job at John Deere, his mother said during the interview.

On Friday evening, Jan. 6, between 150 and 200 friends and other individuals gathered outside the teen’s home for a vigil. Willie Johnson, father of the victim, spoke during the vigil and called on fellow parents to learn from the tragedy.

“We want to turn that negative energy to positive energy,” Willie Johnson told the Courier the night of the vigil. “Use this as a stepping stone to teach your children to do better and know better.”

Willie Johnson also asked residents to remain calm and not rush to judgment.

“We want to let justice take its course, and we just want everybody to be at peace. That’s all we want,” he said.

Davaris Morehead told the Courier he’d known Martavious his entire life. “He was everything that you want your kid to be,” he said.

Queshandis Ramon Seals, a person of interest in Johnson’s unsolved murder, was approached by the Waterloo Police Department’s Violent Crime Apprehension Team at 12:03 a.m. on July 4, 2014, after Seals walked across West Fourth Street against a crossing light and a car nearly hit him.

Courtesy WCF Courier
Queshandis Ramon Seals, 19, was convicted in August 2015 on drug and gun charges, but his defense filed a motion to keep information about Martavious Johnson’s unsolved murder from reaching the jury.

A Waterloo Cedar Falls Courier article dated Aug. 23, 2015, said court records stated the officers recognized Seals when they made contact with him. Seals had lived in the 500 block of Sumner Street in January 2012 where Martavious Johnson had been shot.

“Officers recognized the defendant from previous encounters. The defendant is a person of interest in a 2012 homicide,” police wrote in a report describing the arrest, according to the Courier’s Jeff Reinitz. Because of this and because of shootings nearby on Locust Street in prior days, officers patted Seals down for weapons and found a pistol in Seals’ pocket — an empty chamber and four rounds in the magazine — as well as a bag of marijuana in Seals’ cargo pocket.

Seals admitted to selling marijuana and having paid $160 for the gun, a .22-caliber Sig Sauer, which had been reported stolen in a home burglary three months earlier.

Police arrested Seals, charging him with possession of marijuana with intent to distribute in proximity to a school while in possession of a firearm and carrying weapons, and trafficking stolen weapons and fourth-degree theft.

Seals’ attorney filed a motion to keep information about Johnson’s unsolved homicide from the jury, who on Aug. 20, 2015 found Seals guilty of intent to distribute marijuana and possession of firearm charges but acquitted him of trafficking stolen weapons and fourth-degree theft.

He attended Expo High School and participated in football and basketball at Waterloo East High School.

He was survived by his parents; 11 sisters, Whitney and Danielle Harrington, Ashley, Kendra, Diamond, Shaquinn, Raveone and Nevaeh Johnson, and LaToya McCullen, all of Waterloo, Briana Heffner of Tennessee and Kameelah Hardmon of Milwaukee; three brothers, Marquavious Johnson of St. Louis, Rodrecous Johnson of Waterloo and Ahamad Hardmon of Milwaukee; a nephew, Quaysshon Johnson, who was raised as a brother; his grandparents, Willie and Ethel Harrington Sr. and Mary Johnson, all of Waterloo; and great-grandparents, CillieMae Harrington and Tommie Harris, both of Jackson, Miss., and Charlotte Harrington of Waterloo.

Services were held at 11 a.m. Thursday, January 12, 2012, at Antioch Baptist Church, with burial in Garden of Memories Cemetery in Waterloo. Visitation was held from 5 to 7 p.m. Wednesday and for an hour before services Thursday, all at the church. Sanders Funeral Service assisted the family with arrangements.

Memorials were to be directed to the family at 2207 E. Fourth St., where they received friends.

Tay Tay enjoyed listening to and making music as well as being around family and friends. He favored his Uncle June and looked up to him as role model. He desired to do right, dreamed big and often talked about accomplishing great things.

He was buried on his mother’s birthday.

If you have any information regarding Martavious Johnson’s unsolved murder, please contact the Waterloo Police Department at (319) 291-4340 ext. 3, or the Cedar Valley Crime Stoppers at 855-300-TIPS.

A $1,500 cash reward is available for any information that leads to an arrest in the case.