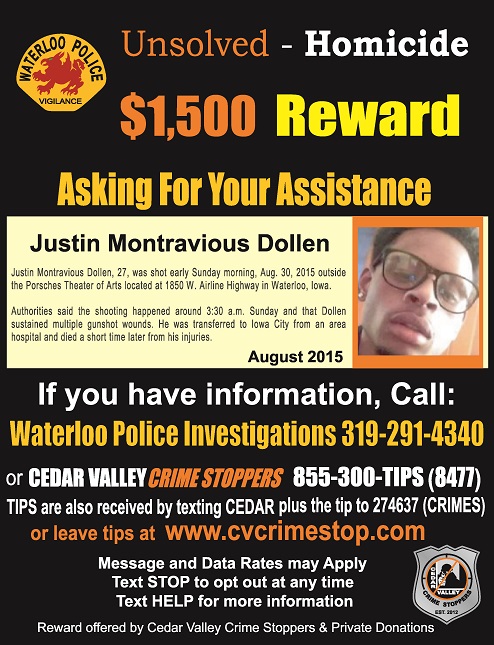 Authorities said the shooting happened around 3:30 a.m. Sunday and that Dollen sustained multiple gunshot wounds. He was transferred to Iowa City from an area hospital and died a short time later from his injuries.

Police remained on scene for more than 12 hours after the shooting, with the investigation seemingly focused around two vehicles at the back of the gentlemen’s club.

KWWL Channel 7 reported August 30 that crime scene tape roped off a back garage door and several cars parked against a retaining wall.

Officials used metal detectors in the areas around the cars and near the property’s entrance.

Police on Monday, Aug. 31, 2015, said they were looking for a dark-colored, possibly purple Dodge Durango, and on Sunday pulled one over that matched the description of the suspect’s vehicle, KWWL reported. Though police found a handgun in the vehicle and arrested one person on weapons charges, police said the person was not a suspect in the homicide.

Police continued to interview witnesses throughout that day.

Dollen had previously spent time in jail for possession of a fire arm.

Justin died Sunday, Aug. 30, 2015, at University of Iowa Hospitals and Clinics, Iowa City, after being shot multiple times outside a Waterloo dance club.

His mother, along with his maternal and paternal grandparents, preceded him in death.

Memorial services were held at 11 a.m. Saturday, Sept. 5, 2015, at Cathedral of Faith Baptist Church, 3040 Hammond Ave, with burial in Fairview Cemetery. Visitation was held from 5 to 7 p.m. Friday, Sept. 4, at Greer Funeral Home and an hour before services at church Saturday.

Anyone with information about Justin Dollen’s unsolved murder is urged to contact the Waterloo Police Department at 319-291-4340 ext 3 or Cedar Valley Crime Stoppers at 855-300-TIPS (8477). Tips may also be sent with TipSoft or by texting the word CEDAR plus the information to CRIMES (274637). Message and data rates may apply. Text STOP to opt out at any time. Text HELP for more information.