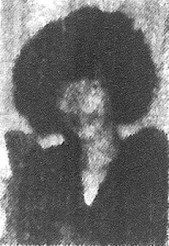 Her badly decomposed body was found early Saturday, Oct. 8, 1983, in a grassy ditch in the 1700 block of Black Hawk Road in southwest Waterloo.

At approximately 8:45 a.m. Saturday, Raymond H. Litzkow of 1750 Black Hawk Road notified police and said he found the body in or near a roadside ditch about 3,000 feet from his home.

A fire department ambulance and firetruck were dispatched to the scene, and the body taken by ambulance to St. Francis Hospital.

The state medical examiner’s office ruled the death a homicide, though Waterloo police would not initially disclose the cause of death, saying it could harm their investigation.

Later reports revealed Jefferson had been stabbed to death.

Litzkow said he couldn’t tell if the body was on his property, which straddles Black Hawk Road, or if it was on the public right of way.

“I didn’t go back and look,” he said in a Waterloo Courier article dated Oct. 9.

Litzkow also said the spot where the body was found had weeds he estimated to be about chest high.

“There’s people jogging by here all the time,” he said, noting that without the tall weeds the body would have been detected sooner.

According to a Waterloo Courier story published Oct. 10, 1983, Capt. Robert Maltas said Jefferson lived in Waterloo but not on a permanent basis.

In a Cedar Rapids Gazette article dated Oct. 14, 1983, State Medical Examiner Dr. Thomas L. Bennett said Jefferson had been dead for approximately 10 days when her body was found. He estimated she died Sept. 29 — the same day she went missing — or shortly thereafter.

According to Waterloo police reports, Jefferson sometimes worked as a prostitute and had some known enemies.

Jefferson had no permanent address, but had been living at the Bel-Air Motel, 3031 University Ave., for about the past month, police said.

The motel was located about two miles from where Jefferson’s body was later found, the Gazette reported.

In a Record Herald story published Oct. 13, 1983, police said they had a suspect in the case but would not comment on whether an arrest was imminent.

She’d resided in East St. Louis but most recently had lived in the Waterloo area.

Her father preceded her in death.

Services were held at Officer Funeral Home in East St. Louis, Ill., with Chapel of Memories East in charge of arrangements.

Joyce’s mother passed away on Aug. 26, 2011 without seeing her daughter’s murder solved.

The Waterloo Police Department and Iowa Cold Cases are hoping to learn more about Joyce Jefferson’s short life. Anyone with photos or stories about Joyce’s life is encouraged to send the information to Investigator Brice Lippert at the Waterloo Police Department or Jody Ewing at Iowa Cold Cases. Photo credit will be provided for any submitted photos.