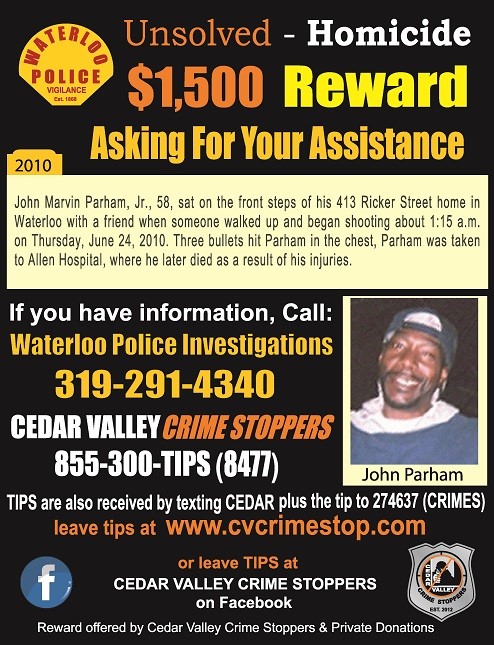 John Marvin Parham, Jr., 58, sat on the front steps of his 413 Ricker Street home in Waterloo with 27-year-old Terence Terril Dixon when someone walked up and began shooting about 1:15 a.m. on Thursday, June 24, 2010.

Three bullets hit Parham in the chest, and Dixon ran off with gunshot wounds to his arm and abdomen.

Parham was taken to Allen Hospital, where he died.

Dixon, who resided at 1762 Flower St., was found about two blocks away at 315 Quincy Street. He underwent surgery Thursday at Covenant Medical Center and later was released.

Neighbors said they overheard a heated discussion involving Parham about one hour before the shooting occurred.

“They were sitting on the steps on Ricker when someone came around the corner and shot them,” Capt. Tim Pillack with the Waterloo Police Department told the Waterloo Cedar Falls Courier in an article dated June 25, 2010.

It sounded like a serious – but not angry – discussion, neighbor John Gaines told the Courier.

Another neighbor, Freda, who declined to provide her last name, told the Courier she heard Parham talking in a serious tone. About an hour later, she said she was jarred from her sleep by sounds of gunfire.

“It was like it was right in my ear,” Freda said. She said she counted about six shots.

Both neighbors said it was surprisingly quiet once the shots faded, with no screaming or yelling.

Investigators believe the shooter used a handgun, and officers found a number of spent shell casings in the area.

Police said the handgun in the shooting hadn’t been recovered, but were asking people to come forward with information and hoping for a breakthrough that would lead to an arrest in the case.

“There has to be some witnesses out there that know what’s going on,” Pillack said. “We need to talk to them.”

Desire to work with young people

“He wasn’t an angel, but people loved him. He had the wisdom about him, and he was able to connect with them.”

John Parham had served two prison stints in his early years, and he tried to convey that incarceration wasn’t a badge of honor but a lifelong obstacle to employment.

Freda said she didn’t know a lot about her neighbor. They would wave “hi” when they passed.

“He was a very nice person,” she told the Courier, recounting how he helped her out when her car was stuck in the snow.

She said she was shocked to know that a violent crime unfolded right outside her window.

“I can’t believe this happened,” she said. “My heart goes out to his family.”

Reginald Parham said the community needs to be more involved with what is going on in their neighborhoods, and witnesses need to come forward.

“They need to speak up and give the information that’s needed to try to stop these things,” Reginald Parham said.

In a Courier story published July 2, 2010, Waterloo Police Lt. Michael McNamee said the department continued to follow up on every lead they received.

“At this point we just need to catch a break and get some good information that pans out,” McNamee said.

Police encouraged anyone with information to call Waterloo Police at (319) 291-4340.

John Marvin Parham, Jr. was born August 21, 1951, in Waterloo, the son of John O. Parham and Vitrue Hobbs. He married Ramona Rickett in 1985 in Waterloo, and the couple later separated.

John was formerly employed by the city of Waterloo and the Northeast Iowa Food Bank.

He was survived by two daughters, Ramona Lisa Parham of Chicago and Vitrue Parham of Waterloo; a sister, Lisa Joy Parham-Sidney of Waterloo; and a brother, Reginald E. (Brenda) of Waterloo. (Reginald died of natural causes on Valentine’s Day, 2013. He was 59 years old.)

John Parham was preceded in death by his parents, and a brother, Warren.

Memorial services were held at 11 a.m. Thursday, July 1, 2010, at Payne Memorial AME Church, with burial in Fairview Cemetery. Public visitation was held from 5 to 7 p.m. Wednesday, June 30, 2010, at Sanders Funeral Service and for an hour before services Thursday at the church.

Memorials were to be directed to the family at 1129 Vine Street.

Cedar Valley Crime Stoppers is offering a $1,500.00 cash reward for information leading to an arrest in Parham’s unsolved murder case.