Jacob “Jake” Biretz, an 87-year-old retired mechanic, was found dead in his apartment at a Waterloo retirement home on Friday, December 10, 1993. The following day, Waterloo police said they were investigating the death as a homicide.

An autopsy — performed in Des Moines by Deputy State Medical Examiner Francis Garrity — concluded that Biretz, who lived at 311 Lafayette St., Apt. B, had died from “asphyxia due to suffocation” Thursday night or Friday morning. The death certificate, signed by Black Hawk County Medical Examiner Dr. Albert Dolan, stated that Biretz was “smothered by unknown assailant(s).” 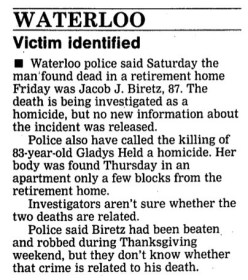 Biretz was found on his sofa, his arms crossed over his chest. He’d been suffocated with a pillow. According to his death certificate, it took several minutes for him to die.

Two weeks before being slain, Biretz, whom friends described as a peculiar man who dressed shabbily and spoke little, had been beaten and robbed during Thanksgiving weekend.

He’d been a regular at Waterloo’s Embassy Lounge the last few years of his life — at least up until the November weekend when he’d been hospitalized following the robbery and assault — and those at the lounge knew him as “Old Jake” rather than Jacob Biretz.

According to reporter Luke Jennett’s WCF Courier article published Aug. 14, 2005, Biretz trusted few people, and feared one cab driver in particular. When Biretz would become tipsy and friends would call a cab for him, Biretz got where he refused to get into the cab if the cabby was the one he accused of often overcharging him and stealing his money.

Syril Milota, Biretz’s upstairs neighbor at the retirement home, told the Courier he’d twice found Biretz “in bad shape” at the Lafayette St. senior facility. The first event, the night before Thanksgiving in 1993, Milota said he heard noises coming from downstairs and had gone to Jake’s room to check on him. There, he said, he found his friend bleeding, having been sprayed in the face with Mace or pepper spray. Biretz said he’d been robbed as well.

Biretz suffered black eyes, bruised ribs, and a five-inch wound on his neck. He said a man wearing all black clothing had gained entry to his apartment after kicking in the back door, and told Milota the man in black was the same cabby who’d stolen his money in the past. Biretz had seen the man only briefly before being sprayed in the face, so was unable to identify his attacker to police.

Two weeks later, Milota saw a man walking around the apartment complex, peering into windows. Soon after, he heard a huge disturbance downstairs.

The next morning, Dec. 10, 1993, joined by the landlady, Milota made his way to Jake’s room. They found him lying with arms crossed over his chest on the couch. He’d been suffocated with a pillow. His death certificate stated it had taken several minutes for him to die. He was 87.

Just one day prior to Biretz’s murder, 83-year-old Gladys Held was found slain at another Waterloo home for senior citizens. 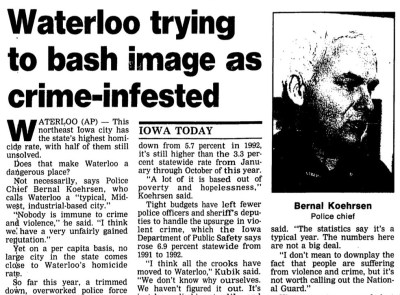 Held, a retired personal secretary, lived on the third floor of the Walnut Court Retirement Community at 315 Walnut Street — just three blocks away from the senior facility where Biretz lived.

Held’s senior home companion became concerned when Held didn’t show up for an in-house church service. He found Held lying the wrong way in her bed, her room tossed. She’d been beaten in the head with a telephone and then strangled.

“Officers of the Waterloo Police Department are continuing their investigation into both homicides. Officers are looking at any and all possibilities to determine if they are connected. No further information will be released at this time, and the investigation is continuing.”

No suspects were ever arrested in either case, though Waterloo police later said they believed the murders may have been committed by the same person. 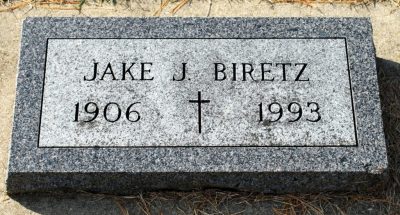 He had retired from his work as a mechanic and enjoyed spending time at the Embassy Lounge in Waterloo.

He was buried at St. Michael’s Catholic Cemetery in Nashua, Chickasaw County, Iowa.