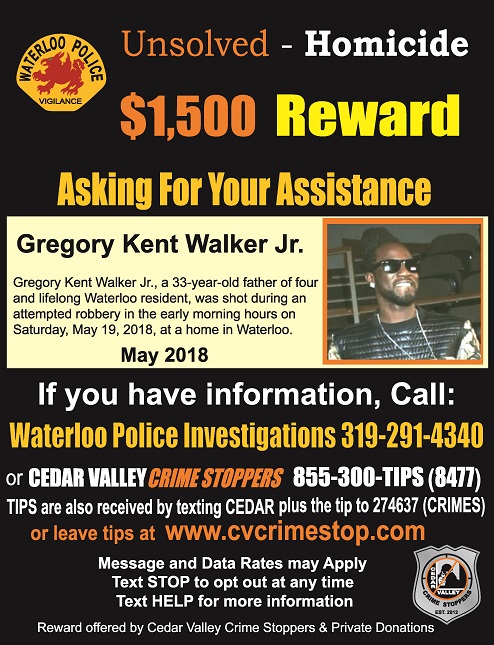 Gregory Kent Walker Jr., a 33-year-old father of four and lifelong Waterloo resident, was shot during an attempted robbery in the early morning hours on Saturday, May 19, 2018, at a Waterloo home.

Relatives said he was supposed to travel to Des Moines to referee a basketball game that day.

Paramedics with Waterloo Fire Rescue took him to UnityPoint-Allen Hospital, where he later was pronounced dead.

Police said two children were also inside the home at the time of the shooting, but were not injured.

According to a Waterloo-Cedar Falls Courier story published May 21, 2018, relatives said the Gable Street address was the home of a friend of Walker’s, and records showed it also was the home of Davon Demetrius Caldwell, who was injured in a shooting hours before Walker was shot.

Walker was one of four victims in three separate shootings Saturday morning throughout the city.

According to Waterloo police, the first incident happened around 12:13 a.m. in the 1300 block of E. 4th Street. After further investigation, officers determined the shots came from the area of Linn and Cottage Streets. Two people, 17-year-old Devonte D. Wright and 21-year-old Cashee M. Williams were treated for non-life-threatening injuries. Wright was treated for a gunshot wound at Covenant Medical Center. Williams was treated for a minor injury at UnityPoint-Allen Hospital and later released.

Officers said a vehicle was also damaged after multiple shots were reported.

At 4:35 a.m., 22-year-old Davon Caldwell was shot outside an after-hours club in the 1600 block of Sycamore Street, and he arrived at UnityPoint-Allen minutes later with a non-life-threatening gunshot wound as a result of the shooting. Officers said they recovered several spent shell casings from the Sycamore Street area, the Courier reported.

Police on the scene of a Gable Street shooting that left one male dead. (Courtesy WCF Courier)

Forty minutes later at 5:16 a.m., officers then responded to a shooting at 639 Gable Street in Waterloo, where they found a male victim — Gregory Walker — “suffering from a serious gunshot wound.” Walker was treated at the scene and then rushed to Allen Hospital, where he died.

An autopsy has been scheduled Monday by The Iowa State Medical Examiner’s Office performed an autopsy on Monday, May 21.

Two days before Walker’s death, police were called on Thursday to Glenwood and Lane streets around 2:35 p.m., the Courier reported on May 19, 2018. Witnesses said someone with a handgun exited a vehicle and fired at Joseph Burris, 20, and a 17-year-old male, who were both on foot.

The gunman then climbed back into the vehicle and left, and no injuries were reported.

In a Courier story published May 24, 2018, Walker’s family members described him as a loving father.

“Me and Greg had a bond that was unbreakable. He would call me about 10 times a day. And he would call all his cousins. He loved his family, he loved his kids,” Annette Davis, mother of Gregory Kent Walker Jr., said Wednesday.

“Him not being here is very overwhelming, because if something was going on the family, he was usually right here in the forefront,” said cousin Mineisha Ford, recalling how he was conscious about his appearance, everything had to match and be color coordinated.

Family members said they want justice. Davis encouraged the person or people responsible to turn themselves in, but she said she wasn’t angry.

The 33-year-old father of four had planned to spend Saturday refereeing an Amateur Athletic Union basketball game in Des Moines, and relatives had suggested he drive down the night before. But Walker opted to stay Friday night in Waterloo so he could be with his children, family members said.

“He was an innocent man, doing what he should be doing, taking care of his children, getting ready to go to work the next morning,” said David Goodson, a friend of the family.

Police said Walker was at a Gable Street home where he was staying around 5 a.m. Saturday when he was shot. He later died at the hospital.

Read the full story at the WCF Courier

About Greg Walker (from obituary)

He was born April 23, 1985, in Waterloo, to Annette Davis and Gregory Walker Sr.

Greg attended East High School. He worked at Tyson Foods until he became disabled, and he refereed in Iowa, Minnesota and Nebraska through the Iowa Referee Association.

He was a member of Pilgrim Rest Baptist Church.

Services were held at noon Saturday, May 26, 2018, at Antioch Baptist Church, with burial in Fairview Cemetery. Visitation was held from 4 to 7 p.m. Friday, May 25, at Pilgrim Rest Baptist Church and for an hour before services Saturday at Antioch. Sanders Funeral Service assisted the family with arrangements.

Memorials were to be directed to the family at 415 Peek St. in Waterloo.

“Greg had an unbreakable bond with his mother and his children,” his obituary said. “He loved his family unconditionally. His passion was refereeing, playing basketball and dancing. He was very creative and put love into everything he did. His smile and sense of humor will be greatly missed by the many lives he touched.”

Photo Captions: (photo of house with Gable St. in front): “Investigators returned to a home at 639 Gable St. on Monday, May 21, 2018, that was the scene of a May 19 shooting that killed 33-year-old Gregory Walker of Waterloo (Courtesy Jeff Reinitz, WCFCourier.com) jeff.reinitz@wcfcourier.com