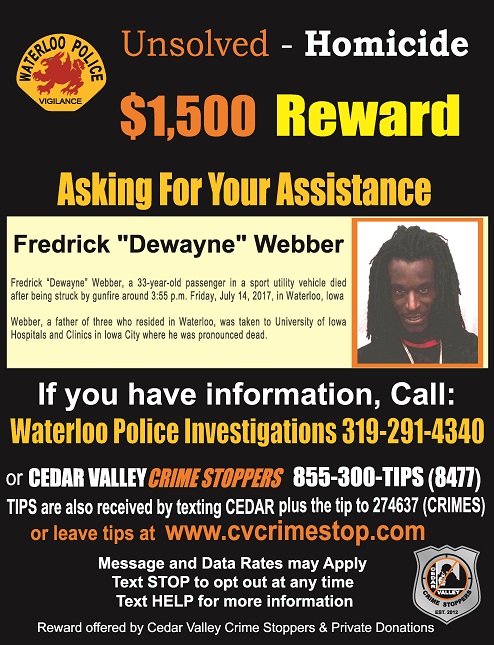 Fredrick “Dewayne” Webber, a 33-year-old passenger in a sport utility vehicle, died after being struck by gunfire around 3:55 p.m. Friday, July 14, 2017, in Waterloo, Iowa.

Webber, a father of three who resided in Waterloo, was taken to University of Iowa Hospitals and Clinics in Iowa City where he was pronounced dead.

Officials identified the wounded driver as 20-year-old Robert Coffer, who was being treated at the same Iowa City hospital but expected to survive.

Waterloo police responded to a call for shots fired shortly before 4 p.m. in the 100 block of Center Street and were later called to a home at 1200 Ackermant Street to find two men who appeared to be in their early twenties suffering from gunshot wounds, The Courier reported July 15, 2017.

The victims arrived at the home in a black sport utility vehicle, which had front-end damage and deployed airbags. The front windshield also was shattered on the driver’s side, possibly from a bullet piercing it.

A neighbor said the injured driver ran into the house while the passenger stayed in the car. The neighbor said there was not a history of trouble at the home and did not believe either of the victims lived there.

Courtesy photo by Amie Steffeneicher / wcfcourier.com
Waterloo police secure the scene after a vehicle with two occupants who had been shot arrived at the home at the corner of Ackermant and West Arlington streets shortly before 4 p.m. Friday, July 14, 2017. The victims said the shooting took place near Utica and Center streets.

Witnesses told police the black SUV was traveling in the 100 block of Center Street when someone in another vehicle began shooting at it. Coffer drove about seven blocks to the Ackermant Street location where police and paramedics found them, said Capt. David Mohlis with the Waterloo Police Department in a Waterloo Cedar Falls Courier article dated July 17, 2017.

The two victims reportedly were able to drive the black SUV to the Ackermant Street home to find help.

Waterloo Fire and Rescue say one man was in the Ackermant house and the other was still in the car when they arrived at the scene.

At the same time, police were also investigating a shooting in the 100 block of Center Street, likely related to the two victims.

At the Center Street location, police were paying close attention to a cement barrier that was upturned and a fence that was damaged; both possibly causing the damage to the SUV’s bumper.

About Fredrick Webber (from his obituary)

Fredrick DeWayne Webber was born on December 7, 1983, in Memphis, Tennessee, son of Dedrick and Gloria (Holmes) Webber. He moved to Waterloo in 2008 to join his mother. Later that same year, Fredrick met Nashae Cook with whom he had three children. He worked at Taco Bell as a Crew Leader/Trainer and hoped to fulfill his dream of having a tattooing business. Fredrick was a big fan of Memphis Jookin’, whether he was watching it on TV or dancing himself. He most enjoyed spending time with his family, and loved to take his kids to the park every day. Fredrick will be remembered as a nice, even-tempered man who enjoyed helping others.

Fredrick passed away from a gunshot wound on Friday, July 14, 2017, at the University of Iowa Hospital in Iowa City.

He was preceded in death by his father; and his grandmother, Annalee Webber.