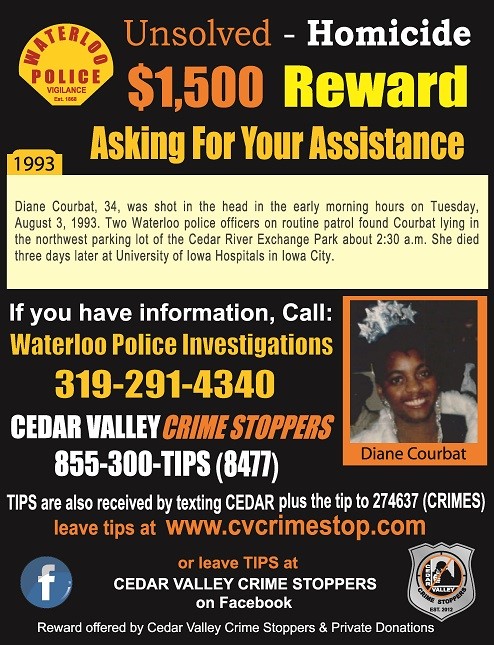 Diane Courbat, 34, was shot in the head in the early morning hours on Tuesday, August 3, 1993. Two Waterloo police officers on routine patrol found Courbat lying in the northwest parking lot of the Cedar River Exchange Park about 2:30 a.m.

Courbat, who resided at 538 Montero Drive, was described as a 5-foot-5 Black female weighing about 130 pounds and dressed in a red tank top, cutoff blue jean shorts, red socks and black shoes.

She died three days later at University of Iowa Hospitals in Iowa City.

Courbat reportedly was breathing when officers found her, and underwent brain surgery that same day. She remained in critical condition at University Hospitals until her death at 9:08 p.m. Friday.

“We treated it like a homicide from the beginning,” Waterloo Police Sgt. Larry Hahn said in a Waterloo Cedar Falls Courier article dated August 8, 1993. “But yes, when she died, that made it official.”

Investigators said they found no sign of a struggle in the parking lot, and Courbat — a foster care worker — was found fully clothed.

Police said the shot was to the side of Courbat’s head, but the gun was not held to her skull. Officials weren’t immediately certain what type of weapon was used in the shooting.

Said she was “all right”

Neighbors told the Courier they saw Courbat leave the mobile home she shared with her husband, David, and her granddaughter about 8 p.m. Tuesday, August 2, but that she’d acted normal.

Courbat joined her husband at the Half Pint Saloon at 1831 Independence Avenue, according to Courbat’s aunt, Brenda Hill of Davenport.

In a Courier article dated August 16, 1993, Hill said Waterloo police officers were among the last people to see Courbat before she was shot.

Officers spotted Courbat about 1:35 a.m. on a street with David Courbat walking behind her, Hill said investigators told her. She said she didn’t know where they were walking. Hill said the officers asked Courbat if she was having problems with the man, and Courbat reportedly told them he was her husband and she was all right.

Courbat’s daughter, Julie Burge, 17, said she thought David Courbat then returned home but that her mother wanted to stay out later.

Police found Courbat’s body in the Exchange parking lot about an hour later.

Her mother never went to Exchange Park, said Burge, and she didn’t know why she would have been there that night.

“When I think about it (the murder) it makes me real mad,” Burge told the Courier. Burge said police were helpful and kept the family informed about any new leads in the case.

Hill described her niece as having a “heart of gold,” and told the Courier “it’s hard knowing she’s not around.”

The family remained in close contact with David Courbat, who went to stay with friends in Davenport following his wife’s murder.

Courbat’s murder was the second in a recent rash of gun-related violence in Waterloo.

In the Courier’s August 16 story, Police Chief Bernal Koehrsen said investigators were looking for people who saw Courbat walking in various parts of the city the night she was killed, but wouldn’t comment as to whether officials had suspects in the Pearson and Courbat murders.

Autopsy results in both cases were tested at the Iowa Division of Criminal Investigation Lab in Des Moines.

Koehrsen, who became Waterloo’s police chief in 1990, had a solid track record of solving murders on his watch. Prior to the Pearson shooting, eight other murders had all been solved.

Waterloo’s last unsolved homicide prior to Koehrsen’s role as chief was the 1989 murder of 23-year-old Jeffery “Jo Jo” Zolliecoffer. Zolliecoffer’s body was found in the Cedar River on September 15, 1989, his body wrapped in a blanket and weighted down with two cement blocks.

Zolliecoffer had suffered a gunshot wound to the chest.

The former Diane Burge married David Courbat in 1987, in Davenport.

She enjoyed shooting pool and dancing.

Memorial services were held at 1 p.m. Thursday, August 12, at Pentecostal Church of God, Davenport, where Diane was a former member. Visitation was held from noon to 1 p.m. Thursday at the church.

Diane was laid to rest in Oakdale Memorial Gardens in Davenport.

Anyone with information regarding Diane Courbat’s unsolved murder is asked to contact the Waterloo Police Department at 319-291-4340 ext. 3 or Cedar Valley Crime Stoppers at 855-300-TIPS (8477). Tips may also be sent with TipSoft or by texting the word CEDAR plus the information to CRIMES (274637). Message and data rates may apply. Text STOP to opt out at any time. Text HELP for more information.

Anyone with information leading to an arrest is eligible for a cash reward.