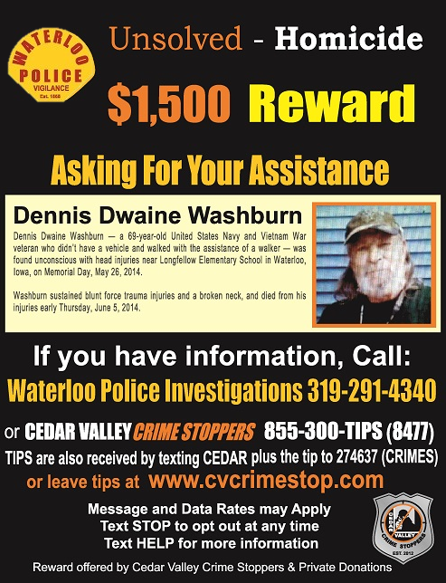 Dennis Dwaine Washburn — a 69-year-old United States Navy and Vietnam War veteran who didn’t have a vehicle and walked with the assistance of a walker — was found unconscious with head injuries near Longfellow Elementary School in Waterloo, Iowa, on Memorial Day, May 26, 2014.

Cedar Valley Crime Stoppers is offering a $1,500 reward to uncover information in the case that leads to a criminal charge.

Robbery may have been motive

According to a Waterloo Courier article dated June 5, 2014, a passerby found Washburn unconscious in the grass near the former Longfellow Elementary School on Edwards Street around 12:30 a.m. May 26. The Longfellow location was on Washburn’s path home.

“He’s basically in a coma. They have him on a ventilator. He has a broken neck, fractures in his face, he has a big, baseball-size knot on his forehead,” his daughter, April Washburn, told WCF Courier reporter Jeff Reinitz in an article dated May 29, 2014.

April Washburn said doctors drilled a hole in her father’s skull to drain off fluid.

“You hear the point that your dad’s being Life-Flighted to Iowa City, and you get there, and find out he’s in coma,” said Andrew Washburn, one of Dennis Washburn’s five children.

Investigators believe Washburn’s injuries resulted from more than just a simple fall and suspect he may have been the victim of a robbery.

April Washburn told the Courier her father’s wallet was located about 100 to 200 feet away from his body, and that his walker was found closer to him on the sidewalk.

“With the injuries he has, there is no way he fell down,” she told the Courier.

Lt. Michael McNamee with the Waterloo Police Department said on Monday, June 9, that investigators were unable to determine what caused Washburn’s injuries.

“He died from the injuries sustained, but they haven’t determined, at this point, how the injuries were sustained, if he was assaulted or if he just fell. It sounded like the injuries could be consistent with either,” McNamee said.

McNamee said another pathologist would review the autopsy in the near future in an attempt to determine manner of death.

On Tuesday, Aug. 26, Waterloo police said the answer may never be known.

He said the case will remain open in the event more information becomes available.

“It’s frustrating. After waiting all of this time, and still, basically, you have no answers,” April Washburn said.

Washburn had withdrawn money from his bank account that day, filled a prescription at CVS Pharmacy, bought some grocery items at the Family Dollar store and later stopped by the Jet Lounge.

April Washburn said her father’s wallet had been found empty and that family members suspected he’d been mugged because his purchases hadn’t totaled the amount of cash he’d withdrawn from the bank.

She said she last saw her father around 10 a.m. Sunday, May 25, 2014, and he appeared fine. He was later seen alone at the Jet Lounge on West Parker Street — about half a mile from the former school on Edwards Street — and left the lounge around 9 p.m., walking east.

The Navy veteran didn’t drive and lived on Leland Avenue, more than two miles from the Jet. It wasn’t yet known how he arrived at the nightclub.

When Washburn departed the Jet, he had a crate of groceries mounted on his walker, and though his wallet was emptied, the groceries were found with the walker.

Police continued to investigate the incident but found little evidence.

April Washburn said doctors removed her father’s ventilator on Monday, June 2, 2014, and that he’d been able to breathe on his own. She said his condition deteriorated Wednesday and doctors told family members there was no chance he would recover.

McNamee called Washburn’s death suspicious, but said investigators would wait for results of any autopsy scheduled Friday at the Division of Criminal Investigation (DCI) Crime Lab in Ankeny.

In the June 5, 2014 WCF Courier story, April Washburn said relatives were at peace because her father was no longer suffering but that they still wanted justice.

“It sucks because we don’t know who did this, and I don’t know if we ever will know,” she told the Courier.

“He passed away at the hands of somebody else. Who’s to say he (the assailant) won’t do this to somebody else?” she said.

After serving with the US Navy, the Waterloo native had gone on to work for John Deere and later worked briefly as a nurse aid.

“When we were younger he was really into cars, just working on any kind of car,” his daughter recalled.

More recently, however, Washburn hadn’t been able to drive and got around assisted by his walker. He frequented the Jet Bar & Grill and enjoyed visiting with long-time bartender Randy Barber, who’d been with Washburn just hours before the incident.

Barber said his friend had just a few drinks, then left the bar around seven or eight in the evening.

Andrew Washburn said he never thought he’d have to take his father off a ventilator.

“As a son, making that decision, is one of the hardest decisions I’ve made in 35 years,” Andrew Washburn said.

The siblings could only wonder what happened to their father that night or in the early morning hours Monday, but said they had a message to those responsible for his death.

McNamee said things were frustrating for police, too, because with Washburn gone, they had to try to piece things together and didn’t have a lot to go on.
“We didn’t get the chance to talk to Mr. Washburn, so it makes it even more difficult,” he said.

Dennis Dwaine Washburn was born Jan. 31, 1945 in Davenport, the son of Keith and Mary (Hein) Washburn. He married Patricia Wehr on April 8, 1978, in Waterloo, and they later divorced.

A U.S. Navy veteran of the Vietnam War, he worked at John Deere Waterloo Tractor Works in C&C and production for many years until retirement.

His parents preceded him in death, along with a brother, Larry Washburn, and a sister, Karen Himer.

Memorial services were held at 10 a.m. Tuesday, June 10, 2014 at Parrott and Wood Chapel of Memories at 965 Home Plaza in Waterloo, with inurnment in Fairview Cemetery.

Following the services, family members attended a potluck dinner at the Jet Lounge, where they accepted freewill donations to take to Crime Stoppers to put toward a reward fund.

An autopsy listed Washburn’s cause of death as blunt trauma but doctors and police have been unable to determine if the death was accidental or criminal. In an effort to discover new information a $1,500.00 reward is being offered for any information leading to a criminal charge.

Tips also may be sent with TipSoft or by texting the word CEDAR plus the information to CRIMES (274637). Message and data rates may apply. Text STOP to opt out at any time. Text HELP for more information. Tips can also be left at WWW.CVCRIMESTOP.COM.