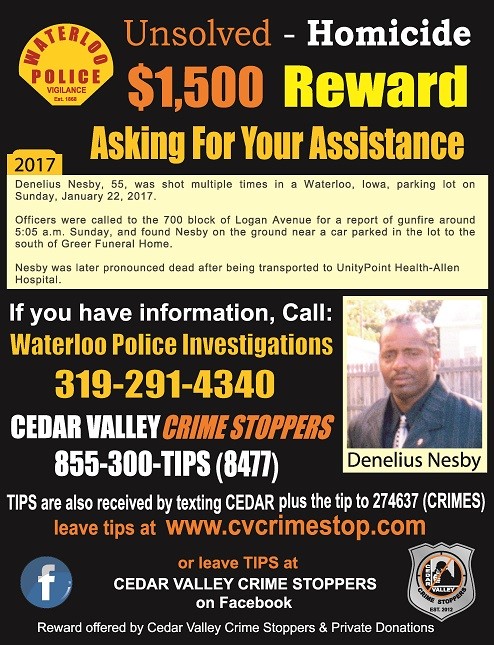 Officers were called to the 700 block of Logan Avenue for a report of gunfire around 5:05 a.m. Sunday, and found Nesby on the ground near a car parked in the lot to the south of Greer Funeral Home.

As part of their investigation, police tried to determine if Nesby’s homicide had any connection to gambling.

Waterloo Police Capt. David Mohlis said one of the leads was information that Nesby had been gambling at a nearby establishment and robbed after winning. Mohlis said officers were also investigating other leads.

Police seized the parked vehicle near Nesby’s body to check for possible bullet holes and other evidence, the WCF Courier reported on January 23, 2017.

It wasn’t clear at the time if the vehicle belonged to Nesby, but Mohlis said officers believed the shooting occurred in the parking lot.

Police reports also showed that at 2:30 p.m. Sunday — about nine hours after the slaying — officers were called to Nesby’s home on St. Albans for a vandalism report, according to The Courier. Someone had ripped a surveillance camera from the home, though the police report stated that family members said they were able to repair the camera.

On New Year’s Day in 2017, police were called to a shots fired complaint in the same spot where Nesby would sustain multiple gunshot wounds three weeks later.

According to a KWWL.com report that aired January 23, 2017, Greer’s Funeral Home and a house were hit by bullets during the New Year’s Day shooting.

Five weeks after Nesby’s murder, an armed robbery took place in the same location. Tamikka Bradford, 38, and Adrian Oliver, 27, told police they’d gone to their vehicle in the 700 block of Logan Avenue shortly before 3 a.m. Sunday, February 26, 2017, when they were approached by three men. Two of the men had handguns, and they took a purse, cell phones and jewelry before fleeing, The Courier reported February 27.

Late in March 2017, Waterloo police released several surveillance camera images taken the night of Nesby’s murder and asked the public for help in identifying the people in the photos. Investigators believe the men pictured have information about the case.

Police also posted the photos on the Cedar Valley Crime Stoppers Facebook page, and Crime Stoppers is offering a $1500 reward for information in the case.

The vehicle near the location where Nesby’s body was located also appeared to have gunfire damage, The Courier reported on April 4, 2017.

Cedar Valley Crime Stoppers is offering a $1,500 reward for information in the case.

About Denelius Nesby (from obituary)

He was born April 10, 1961, in Iowa City, the son of Richard Sanders and Lizzie Nesby. He married Mandy Howard on November 7, 2003, in Newton; they later divorced.

He was employed by AARP.

Preceded in death by: his parents; and a brother, Kosedrous Nesby.

Services: 11 a.m. Monday, January 30, 2017, at Mount Carmel Baptist Church, with a private burial. Visitation will be from 4 to 6 p.m. January 29, 2017, at Sanders Funeral Service and also for an hour before services Monday at the church.

Memorials: may be directed to 119 St. Albans St., Waterloo.