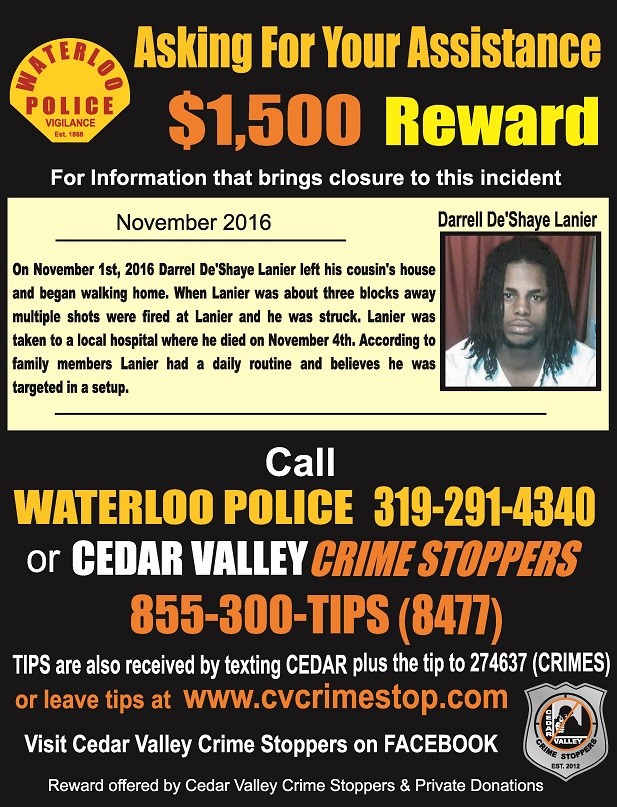 The 22-year-old lifelong Waterloo resident was about three blocks from home when he was shot and collapsed. He lingered unconscious at UnityPoint Health-Allen Hospital for three days and underwent two surgeries before dying early Friday from internal injuries associated with the bullet wounds, police said.

Details about what happened aren’t clear. Police found about a dozen spent shell casings in the alley behind the 1800 block of Franklin Street shortly after neighbors reported hearing numerous gunshots around 10:20 a.m. Tuesday. Lanier was found on the ground in the 400 block of Rhey Street.

“They couldn’t be man enough to fight him fair, whatever the problem was. They want to shoot him. They ran him down and shot 15 times, and four bullets hit him. Walking home, minding his own business,” said Debra White, Lanier’s grandmother.

Lanier’s aunt, Desiree White, said she believes he was shot by people who were trying to get at his friends.

“They knew this would break his friends’ hearts. … He was just a target for them to get because they knew they could get him,” said White, who had raised Lanier and refers to him as her son.

Lanier’s trek to his cousin’s home was part of his daily routine, so it would have been easy to locate him, Desiree White said. He usually walked alone, she said, and Tuesday the cousin wasn’t home, so he turned around and headed home.

“I know they been watching my baby because he walks every day at that time. It was a setup,” White said.

Police have released little about the ongoing investigation, but Capt. David Mohlis said Lanier was targeted, that he wasn’t struck by a stray bullet. He also said it appears only one gun was used.

Investigators continue to interview witnesses to develop a clearer picture of what happened, and Lanier’s body has been sent to the Iowa State Medical Examiner’s Office in Ankeny for an autopsy.

No arrests have been made.

Meanwhile, friends and relatives gathered at the family home for support on Friday.

“I hope they don’t just push this aside. I hope they get off into it,” said Rogena Jones, Lanier’s cousin.

Debra White said she is concerned so many young people have access to firearms.
“Why is all of this shooting going around? This stuff needs to stop. Parents need to get together and talk to their kids, because some of these parents know what their kids are doing,” Debra White said.

They remembered Lanier as a fun-loving person with a great sense of humor.

“Darrell was the type of person who had a good sense of humor, a very kind heart. He was one of those kids that anybody could just get along with. He was always a joking person,” Desiree White said.

“They broke my heart, but my baby still has his soul. I know he’s in a better place now. My baby is resting, and he doesn’t have to deal with all this wicked and evil down here on this Earth. He went home peacefully,” Desiree White said.

He was born May 28, 1994, in Waterloo, son of Robert Lanier Jr. and Selina White. He was a graduate of Waterloo East High School, and was formerly employed at Crystal Distribution.

Services: 11 a.m. Monday, Nov. 14, at Union Baptist Church with burial in Fairview Cemetery. Friends may call at the church today from 7 to 8:30 p.m. and for an hour prior to services on Monday. Sanders Funeral Service is assisting the family.

Memorials: to the family at 122 Linden Ave., Waterloo.