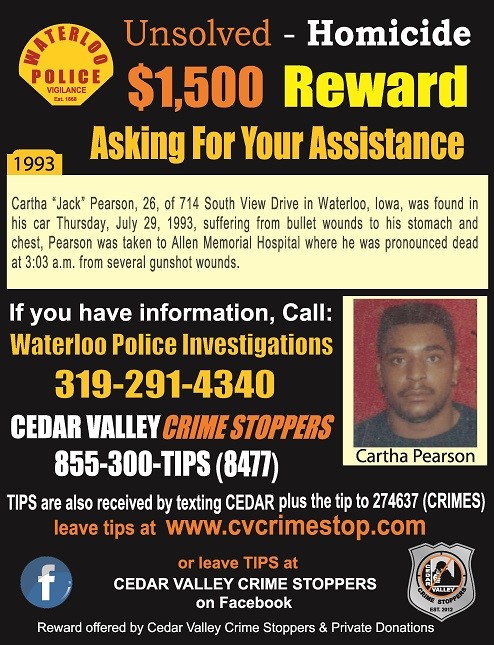 Cartha “Jack” Pearson, 26, of 714 South View Drive in Waterloo, Iowa, was found dead in his car Thursday, July 29, 1993, from bullet wounds to his stomach and chest, and Cedar Valley Crime Stoppers is asking witnesses in the decades-old unsolved murder to come forward with any known information about the case.

A Waterloo Cedar Falls Courier article dated August 16, 1993, said Pearson was shot to death in an alley between the 100 block of Sumner and Cottage Streets after he allegedly cheated some drug dealers by not paying them or only partially paying them for drugs.

A Courier article dated July 29, 1993, said Pearson was found slumped over in his car against a utility pole in the 200 block of Linn Street about 2:20 a.m.

Pearson was taken to Allen Memorial Hospital where he was pronounced dead at 3:03 a.m. from several gunshot wounds to the chest and abdomen, said Assistant County Medical Examiner Dr. Mark Bickley.

The shooting occurred in the parking lot and alley behind Goodie’s II lounge at 115 Sumner St., and police said Pearson was alone in his vehicle. The vehicle slowly crept down the alleyway before coming to a stop against a utility pole on Linn Street.

The Courier said sources indicated there were eyewitnesses to the incident.

No one wanted to talk.

In a Courier article dated July 30, 1993, police spokesman Lt. Bob Greenlee would neither confirm nor deny whether Pearson’s shooting was related to eight shootings and an assault that occurred earlier in the week. Investigators had received some calls, Greenlee said, but not from anyone who witnessed the murder.

Had sought help for drug use

Known as “Jack” on the street, the 6-foot-1 Pearson was described as “muscular,” weighing somewhere between 275 and 300 pounds.

A St. Louis native, Pearson had lived in Mississippi and started working for Kenneth & Warren Contracting Co. as a laborer shortly after coming to Waterloo in 1991.

In the Courier’s July 30 story, Denman Phillips Jr., co-owner of Kenneth & Warren, said Pearson was trying to get treatment for his drug problem. He called Pearson a “nice guy” and a good worker when not using drugs.

Pearson lived with his fiancée, Donetha Donald, and the couple’s 1-year-old daughter.

Phillips said Pearson’s work record was sporadic, depending on drug use, but commended the 26-year-old for trying to seek help.

According to Lt. Greenlee, Pearson’s name was not normally associated with gangs in the area.

One neighbor near the intersection of Linn and Cottage streets said he didn’t think anyone would come forward with information about the shooting because they feared retaliation from gangs. The neighbor told the Courier:

“People are not going to talk to you about it. They’ll be a candidate for a drive-by shooting.”

Less than a week after Pearson’s slaying, 34-year-old Diane Courbat was shot in the head in the Cedar River Exchange Park’s parking lot on August 3.

In the Aug. 16, 1993 Courier article, Waterloo Police Chief Bernal Koehrsen said police had been investigating Pearson’s murder for more than two weeks. He declined to comment as to whether officials had suspects in either of the recent homicides.

Autopsy results in both cases were sent for testing at the Iowa Division of Criminal Investigation laboratory in Des Moines.

Pearson’s fiancée told the Courier his death was still a shock to her. She said police had questioned her, but she didn’t know who might have killed Pearson.

“If I could, I would hire a private detective or something, but I can’t afford it,” Ms. Donald told the paper.

She said Pearson liked car racing, and that when they’d first met, there were hopes he would become a professional race car driver. They’d planned to marry in a year.

Koehrsen, who became Waterloo’s police chief in 1990, had a solid track record of solving murders on his watch prior to Pearson’s shooting; eight other murders had all been solved.

Waterloo’s last unsolved homicide prior to Koehrsen’s role as chief was the 1989 murder of 23-year-old Jeffery “Jo Jo” Zolliecoffer. Zolliecoffer’s body was found in the Cedar River on September 15, 1989, his body wrapped in a blanket and weighted down with two cement blocks.

Zolliecoffer had suffered a gunshot wound to the chest.

He resided at 714 South View Drive with his fiancée, Donetha Donald and the couple’s 1-year-old daughter, and most recently had worked as a truck driver for Denman Phillips’ construction company.

Anyone with information regarding Cartha “Jack” Pearson’s unsolved homicide is asked to contact the Waterloo Police Department at 319-291-4340 ext 3 or Cedar Valley Crime Stoppers at 855-300-TIPS (8477). Tips may also be sent with TipSoft or by texting the word CEDAR plus the information to CRIMES (274637). Message and data rates may apply. Text STOP to opt out at any time. Text HELP for more information.