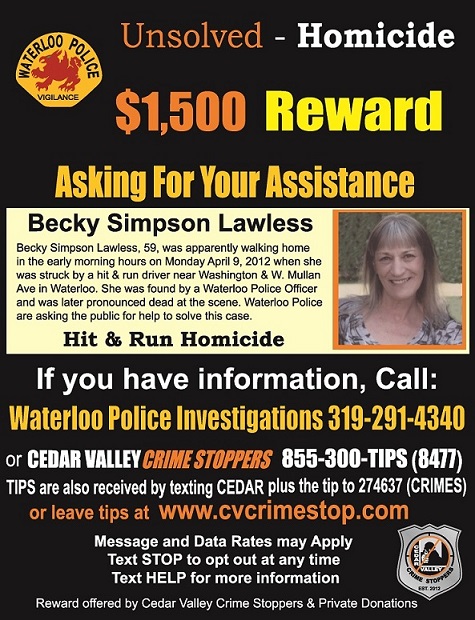 Becky Simpson Lawless, 59, of Waterloo, was apparently walking home from a tavern in the early morning hours on Monday, April 9, 2012, when she was struck by a hit-and-run driver in the area of Washington Street and West Mullan Avenue.

A patrol officer passing through the area discovered Lawless’ body about 4 a.m. after spotting clothing in the intersection and stopping to investigate. When the officer got out of his vehicle, he discovered Lawless lying on the side of the road. She showed no signs of life, and a medical examiner pronounced her dead at the scene.

It wasn’t clear how long Lawless had lain along the road or who might have struck her, and an autopsy was scheduled Tuesday by the State Medical Examiner’s Office in Ankeny.

In a Waterloo Cedar Falls Courier article dated April 10, 2012, family members said Lawless lived with her father, Oren Simpson, at his Patton Avenue home. They said they last saw her “Sunday evening for supper” at her daughter’s home — a dinner that included relatives from out of town.

“We all had a nice Easter dinner,” Oren Simpson said.

Lawless didn’t have a vehicle, and Simpson said he gave his daughter a ride to Prairie Lakes Park in Cedar Falls where she met her boyfriend for fishing about 5:30 p.m.

According to relatives, Lawless left the boyfriend’s house in Waterloo sometime during the night. Family members said they didn’t know why she was in the West Mullan Avenue area.

Waterloo police said there were no witnesses in the hit-and-run, and asked anyone with information to come forward.

In the meantime, relatives pulled together for the second family tragedy in recent months; Lawless’ daughter, Heather Nicol, had died of cancer at age 41 less than a year earlier in September 2011.

Heather had been known for her commitment to caring for stray cats; she’d often find ill or injured animals and take them to the veterinarian for treatment.

The person who later would hit and kill her mother would not afford a human being that same compassion.

One Year Later — Silence and Storms

One year after her mother’s unsolved homicide, Abbey Kurth of Cedar Falls had planned a vigil for Tuesday night, April 9, 2013, to note the lack of justice in her mother’s case.

The driver who hit and killed Lawless had never come forward, never admitted to hitting the woman by accident, never provided peace to a family who’d waited one long year for answers.

Rain and thunderstorms forced Kurth to cancel the vigil — perhaps an ironic twist to a driver’s year-long silence.

“Whether or not he gets arrested, he has to live with it every day,” Kurth said in a WCF Courier article dated April 10, 2013.

Kurth said she couldn’t fathom how a person could leave her mother dying in the roadway. She said she was told the vehicle had dragged Lawless a short distance.

Though she still doesn’t know what her mother was doing in that particular area that night, Kurth said she had learned her mother was struck and killed in the same area where the patrol officer later found the body; it was somehow comforting knowing her mother had not been killed elsewhere by some other means and then moved, as she had feared.

Kurth also took comfort knowing her mother’s death was likely an accident and not intentional.

Still, given the location and intersection where Lawless was hit — as well as the news coverage following the fatal hit-and-run — it’s highly unlikely that the person who struck her wasn’t aware he or she had hit someone. And, given the approximate hour when the victim was killed — when area bars would have closed and intoxicated drivers would be returning home — little question remains as to why the person or persons responsible have not yet come forward.

Grading the Crime — A to F

Whether the driver causing Becky Lawless’ death was intoxicated or not, Iowa Code Chapter 707 clearly defines Homicide or Serious Injury By Vehicle.

Yes, it is a felony.

Additionally, whenever someone is fatally injured in a drunk driving “accident,” the driver may face up to 25 years in prison.

Vehicular homicide is not always deemed an accident, particularly when one remains silent in a hit-and-run.

Becky (Simpson) Lawless was born May 26, 1952 in Waterloo, the daughter of Oren H. and Eddie Crenshaw Simpson. She graduated from West High School.

She was survived by her father of Waterloo; a daughter, Abbey (Chris) Kurth of Cedar Falls; two sisters, Gloria (Chuck) Drier of Waverly, Joyce O’Malley of Bettendorf; a brother, Jeff (Rhonda) Simpson of Hatfield, Mo; a son-in-law, Troy Nicol of Cedar Falls; and three grandsons, Tyler Kurth of Anamosa, Coty Kurth and Jordan Nicol, both of Cedar Falls.

She was preceded in death by her mother; a daughter, Heather M. Nicol; one niece and two nephews.

Memorial services were held at 11 a.m. Saturday, April 14, 2012, at St. Andrew’s Presbyterian Church in Waterloo, with visitation held one hour prior to services. Her body was cremated.

Kearns, Huisman-Schumacher Chapel was in charge of arrangements.

Memorials were to be directed to the family.