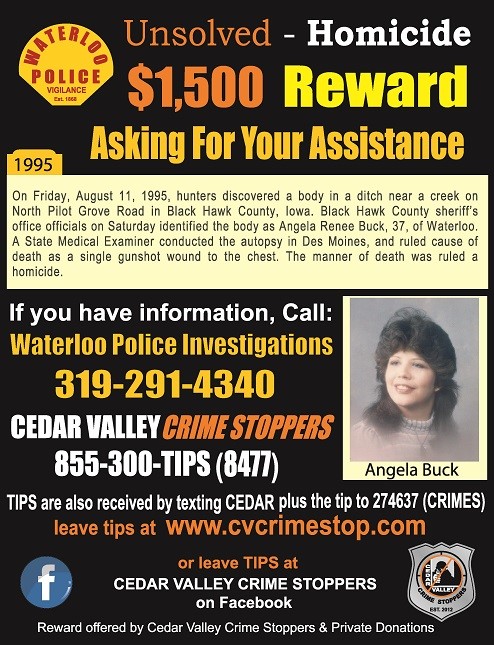 On Friday, August 11, 1995, two men hunting for turtles discovered a body in a ditch near a creek on North Pilot Grove Road in Black Hawk County, Iowa.

The body — clad in a greenish halter top, jean shorts and muddy white socks but no shoes — lay just below a short bridge in a wooded area about one and one-half miles east of Independence Avenue in Waterloo and south of Dunkerton.

Black Hawk County sheriff’s office officials on Saturday identified the body as Angela Renee Buck, 37, of Waterloo, Iowa, after comparing fingerprints and dental records. They believed she had been dead not more than two days, and released her identity on Sunday after contacting Buck’s relatives.

State Medical Examiner Dr. Francis Garrity conducted the autopsy at Broadlawns Medical Center in Des Moines on Saturday, and ruled cause of death as a single gunshot wound to the chest. The manner of death was ruled a homicide.

No Attempt to Hide Body

According to an August 12 story published in the Waterloo Cedar Falls Courier, Jeff Edgar, 33, of Waterloo, and Brad Hague, 34, of Jesup, worked together at Eagle Tanning Co. in Waterloo and had just finished working the third shift about 10 a.m. Friday when they decided to go looking for places to set turtle traps.

As they crossed the North Pilot Grove Road bridge around 10:45 a.m., they saw the body lying about six feet from the water.

“We just kind of looked at each other, with goosebumps,” Hague told the Courier about the discovery, adding that neither of them went near the body. “We stayed away,” he said.

The men went to Laura Hansen’s nearby farmhouse to call police, and later provided officials with written statements.

Hague said the woman lay in a fetal position, and there was no apparent attempt to hide the body because it could easily be seen from the bridge. He said he didn’t notice a large number of footprints in the area, but that it appeared a nearby pool of shallow water might have held a trace of blood.

Twenty investigators worked the scene until nightfall Friday, searching the creek, fields and ditches, and carrying away bags of what appeared to be evidence, the Courier reported.

Jim Anderson, who lived at a farmhouse in sight of where Buck’s body was found, told the Courier he was called to the scene Friday and asked if the creek had been flooded recently.

“I think they were wondering if she had washed down the creek,” Anderson said.

Two deputies were stationed at the scene on Saturday, stopping cars and recording names and license plate numbers of passing motorists.

On Sunday, August 13, the Black Hawk County Sheriff’s Office announced it was handling the case as a homicide, but did not identify any suspects or a motive.

[Then] Black Hawk County Sheriff Mike Kubik said officials weren’t sure if the body had been dumped at the creek or if the death occurred there, and no arrests have been made in the case.

Officials said Buck did not have a permanent address, but was from the Waterloo area. She had worked as a nurse’s aid and later worked at Ravenwood Health Care Center, but recently had been attending school to become a radio announcer.

“She had a big heart, she cared about people, she worried about things, the stress of life and things like that,” Buck’s cousin, Rick Luchtenburg of Shell Rock, said in a Waterloo Cedar Falls Courier article published Monday, August 14, 1995.

Luchtenburg said the death of Buck’s mother, Lorene, had been difficult for Angela. Lorene (Crowley) Buck, a former Evansdale City Council member, had passed away three years earlier in 1992 after a lengthy illness. Angela’s cousin, Mike, had passed away a year before.

The family, Luchtenburg said, was shocked after learning of Buck’s death.

According to Buck’s aunt, Pauline Huisman of Grundy Center, Angela had been living with her mother in Evansdale, but began to drift after her mother’s death.

“Her whole life has been sad”

The Courier reported on August 15 that Betty Stewart of Waterloo had rented part of a duplex at 110 Prince St. to Buck the previous summer.

Stewart described Buck as a lonely person with a fast-paced lifestyle. According to the August 15 article, Buck rented out the bottom three rooms of Stewart’s duplex for about four months in 1994, leaving in the fall. Stewart lived in the top four rooms.

“She was just a good person mixed up,” Stewart told the Courier. “I think she needed help. I think she needed more counseling than she received. I think if she could have gotten that, then maybe she wouldn’t have been around some of the people she was and she would be here today.”

By that time, Buck had let her children go to live with their father, and Stewart said Buck missed them terribly. Buck spoke of her children often and wanted to introduce them to Stewart, but moved away before Stewart got to meet them.

“It is sad, it’s real sad what happened — her whole life has been sad,” Stewart said.

Courtesy photo Matthew Putney/WCF Courier
When Black Hawk County Sheriff Michael Kubik retired in Dec. 2008, he said he still thought about two cases that went unsolved; that of Dale Redman of LaPorte City and Angela Buck. He said investigators hadn’t given up on bringing the perpetrators to justice.

Three days before finding Buck’s body, officials found the body of 24-year-old Connie Jo Choate Bodensteiner, Des Moines, in the basement storage unit of a Des Moines south side apartment. Bodensteiner had been strangled. Both women had records of prostitution and at one time had worked for Greg Peterson, a “John” who operated a prostitution service out of his Urbandale, Iowa, mobile home.

Authorities investigated possible connections between the two murders, but later said they were not connected.

“Their paths had crossed, but there’s nothing we found at all that these were related,” Des Moines Police Sgt. Tom Trimble told the Cedar Rapids Gazette in an article published August 18, 1995. “There were no real similarities at all in the method.”

A business rival beat Peterson to death in August 1994, a year before Buck’s murder.

An August 12 article in the Courier — before officials had formally identified Buck’s body — had confirmed the body found in Black Hawk County was not that of missing Mason City anchorwoman Jodi Huisentruit, 27, who’d apparently been abducted from her Mason City apartment six weeks earlier.

In a WCF Courier article dated December 26, 2008, Kubik said that for all the cases solved over the years, he still thought about the two that remained open — that of Dale Redman of La Porte City, and Angela Buck’s August 1995 death.

Investigators, Kubik said, still haven’t given up on bringing the perpetrators to justice.

Angela Renee Buck was born April 17, 1958, in Waterloo, Iowa, the daughter of Richard and Lorene (Crowley) Buck. Lorene, who served on the Evansdale City Council, died in 1992 after a lengthy illness.

Angela married Dwight R. Shelton in Waterloo on October 22, 1976, and the couple had two daughters and a son before divorcing November 30, 1984; Angela took back her maiden name at that time.

She and her ex-husband shared joint custody of the children, who lived with their mother. Angela would later have another son.

Family and friends described Angela as a woman with a big heart who loved her four children, but who fell upon hard times and in with the wrong crowd.

Angela was voted as the Evansdale Junior Miss in 1970 at age 12, played the violin with her school orchestra, and loved horseback riding. Prior to her death, she’d been working toward getting her life back together and been attending school in Madison, Wisconsin, to become a radio announcer.

Her mother and a cousin preceded her in death.

Memorial services were held at 2 p.m. on Thursday, August 17, 1995 at the Waterloo Memorial Park Cemetery chapel, with burial in Memorial Park.

Visitation was held from 5 to 7 p.m. Wednesday, August 16, at Kearns, Huisman-Schumacher Chapel on Kimball and for an hour before Thursday’s services.

The family asked that memorials be directed to the Waterloo DARE program.

Launched in June 2012, Cedar Valley Crime Stoppers’ goal is to help keep Cedar Valley neighborhoods safer. The program allows citizens to report suspicious and criminal behavior while allowing them to remain anonymous. No calls are traced, and if a tip leads to an arrest the caller is eligible for a cash reward.

CV Crime Stoppers believes “someone other than the criminal has information that can help solve a crime,” and works to help the community overcome two major issues in crime reporting: fear of reprisal, and the reluctance to get involved.

Anyone with information about Angela Buck’s unsolved murder is asked to call the Black Hawk County Sheriff’s Office at 319-291-2587 or Cedar Valley Crime Stoppers at 855-300-TIPS (8477). Tips may also be sent with TipSoft or by texting the word CEDAR plus the information to CRIMES (274637). Message and data rates may apply. Text STOP to opt out at any time. Text HELP for more information.

Anyone with information leading to an arrest is eligible for a cash reward.