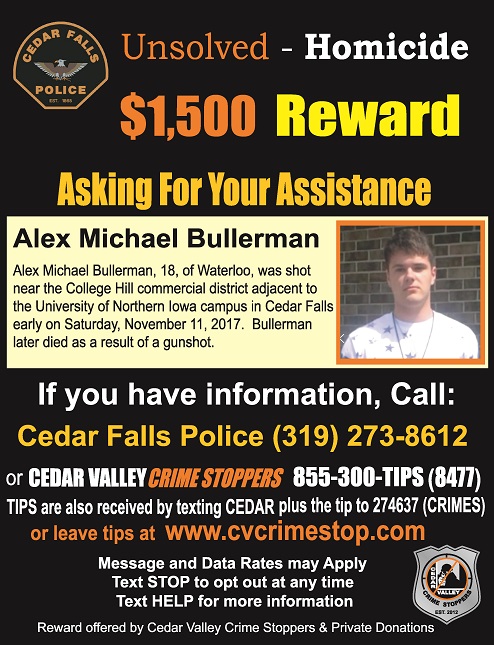 Alex Michael Bullerman, 18, of Waterloo, Iowa, was shot in the College Hill commercial district adjacent to the University of Northern Iowa campus in Cedar Falls early on Saturday, November 11, 2017.

Officers were called to the 2300 block of Olive street about 12:45 a.m. after witnesses reported hearing several shots fired. According to Cedar Falls police, first responders found Bullerman in the back yard of an apartment building located at 2303 Olive Street.

Officials transported Bullerman to UnityPoint Health-Allen Hospital in Waterloo, where the teen died from a gunshot wound to the stomach area.

That same day, per Bullerman’s wishes, doctors from the Iowa Donor Network spent five hours of surgical procedures harvesting everything they could use from his body, The Courier reported.

About an hour after the first call of shots fired, 18-year-old Dylan James Gehrke, also of Waterloo, arrived at a hospital by private vehicle with a single gunshot wound to his lower right leg, the Waterloo-Cedar Falls Courier reported Nov. 11, 2017. Gehrke was treated and released from the hospital, The Courier said.

“At this point, we don’t believe there is an ongoing threat, but we will have a little more of a presence there,” Cedar Falls Police Chief Jeff Olson said.

Courtesy Photo: Kelsey Kremer/The Register
The College Hill neighborhood on the edge of the University of Northern Iowa campus on Wednesday, Oct. 21, 2015 in Cedar Falls. A man was shot to death in the area on Saturday, Nov. 11. 2017.

Olson told The Courier the two victims had been at a College Street establishment earlier that evening and were injured when gunfire erupted outside after they left. Olson said it appeared the victims were targeted.

Also on Nov. 11, 2017, Chief Olson told KCRG-TV9 the two shooting victims were gang members. Olson said Bullerman and Gehrke were leaving a bar near the College Hill area when they got into an altercation with some people in a parking lot.

“Our officers are familiar with some of the gang members as well, Waterloo much more so,” Olson said in the Nov. 11 TV9 story. “So some of our officers had those suspicions that this would be gang related shortly after getting that call.”

Courtesy photo, The Courier
Cedar Falls police are seeking the public’s help in identifying the woman in this photo in connection with the Nov. 11, 2017, homicide of Alex Bullerman in the 800 block of West 23rd Street.

Olson said police are working with other agencies in Black Hawk County to get rid of gangs, including the tri-county drug task force comprised of Waterloo and Cedar Falls police officers and sheriff’s deputies from Black Hawk County.

On Nov. 30, 2017, police released a photo and asked for the public’s help in identifying a woman who was observed walking in the 800 block of West 23rd Street at or about the time Bullerman was shot.

About Alex Bullerman (from obituary)

Alex Michael Bullerman was born Nov. 28, 1998, in Waterloo, the son of Pat and Gail Schoo Bullerman.

He attended St. Edward Elementary School and Blessed Maria Middle School, and graduated from Waterloo West High School in May 2017.

In addition to his parents, survivors included: two sisters, Sarah Bullerman of Waterloo and Leslie (Fatah) Teghanemt of Coralville; a brother, James Bullerman of San Diego; his maternal grandparents, Leon and Mary Schoo of Waterloo; three nephews, Colin, Carson and Liam; many aunts, uncles and cousins.

He was preceded in death by his paternal grandparents, Alphonse and Alice Bullerman; and two cousins, Brad Haugen and Neiko Morris.

Memorial services were held 10:30 a.m. Wednesday, Nov. 15, 2017, at St. Edward Catholic Church, with burial in Mount Olivet Cemetery. Visitation was held from 4 to 7 p.m. Tuesday, Nov. 14, at Hagarty-Waychoff-Grarup Funeral Service on West Ridgeway, along with a 6:30 p.m. vigil. Visitation continued for an hour before services at the church Wednesday.

Anyone with information regarding Alex Bullerman’s shooting is asked to contact the Cedar Falls Police Department at (319) 273-8612.